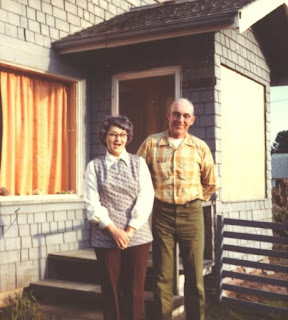 Aunt Pauline and Uncle Allen were favorites of mine since I was a child.  Pauline was my grandmother's younger sister and Allen was her husband.  I can still picture Pauline zipping about and Allen with his shirt unbuttoned with a beer in a beer cozy in his hand.  They were fun and there was always a smart ass comment.  There were a few times when I remember Pauline and Allen staying with us at our house.  They would stop by in their trailer and other than a nap or two, we were altogether visiting.  What wonderful memories!

Pauline had a way of looking at you and listening to you that made you feel as if you were one of the most important people in her life.  I haven't seen that talent in that many people but I have in my grandmother and her sisters...and I suspect that they got it from their mother.  Pauline made me feel special and important.  I think she did that for just about everyone.  I found it funny and endearing that just about every card I ever received always had a wonderful note in it which included what the current weather was in Waldport, OR where she lived.  They were lovely newsy notes that always made me smile.

Allen was a big bear of a man with wonderful hugs and a twinkle in his eye.  I knew as a child that he had a bad back because my parents told me, but it wasn't something that he ever told me much about.  Allen was always good for a story and he was always teasing me.  I used to think that we had something special because we had the same birthday.  I can remember time and time again that I found myself sitting next to Allen to hear what he would say next.  I learned a lot of family stories at his side!

I think I must have been about 19 and it was the first trip that I drove to Canby, OR to spend spring break with my grandmother and great grandparents.  I started out my trip getting lost in Portland, OR because I took a wrong turn.  I ended up in a not so nice area :)  I got myself turned around and made it to Canby.  I spent a few days there and then decided to go down to see Aunt Pauline and Uncle Allen at Waldport, OR.  I was excited to go and see the ocean and have some wonderful seafood.  After another adventure in driving (this was my first long road trip), I made it to Aunt Pauline and Uncle Allen's.  After the initial greeting, Aunt Pauline was excited to show me her home town.  I changed out of my new tennis shoes and we began by walking around on the beach and then walking through town.  I learned at that point, that I wasn't the only person that Pauline made feel special.  Pauline was known and affectionately greeted by everyone.  What a wonderful special day that I spent with her.  I have never forgotten it!

When we got home, Pauline promised me a special treat.  I am not sure we were on the same page, because I was hoping for seafood.  Instead, Pauline brought out a frozen pepperoni pizza.  I was a freshman in college and my tastes had been elevated to Domino's and pizza delivery.  As we sat down to eat, Pauline took a pot off the stove of Allen's favorite beans.  Then I saw Allen grab a spoonful of those beans and place them on his pizza.  I can honestly say that I have never seen that before or since. 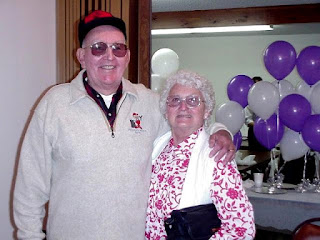 We lost Allen back in 2001 and we lost Pauline on Jan 24, 2020 at the age of 94.  I suppose that I will aways think of that trip to Allen and Pauline's and remember the fun and enthusiasm of Pauline and the twinkle and teasing of Allen's.  Whenever I see the ocean, I remember walking on the beach with Pauline....and whenever I see a pot of beans - Allen definitely comes to mind.  I have missed Allen for the last 20 years and will miss Pauline terribly.  I can't help thinking of how lucky I have been to have known and loved these two wonderful people who always made me feel special.  I hope they knew how special and they were loved by me and everyone else who knew them!