A few weeks ago, I noticed that one of my cousins had a friend reply to her in a post on Facebook.  I told him that he was probably related to my cousin.  He replied that no...that wasn't possible because the name wasn't spelled the same.  This reminds me how many people who do genealogical research of any sort who get caught up in name spellings and neglect to look at the other possibilities.

I have a several families that most likely all descend from a common immigrant ancestor - no matter how the name is spelled.  Here are a few of them.

Pitsenbarger:  I have seen the name spelled Pitzenberger, Pittsenbarger, Pitsenbarger or Pittsonbarger - however it is spelled, most people in this country with that name in their ancestry most likely descend from the immigrant ancestor Abraham Pitzenberger  He was born before 1750 in either Switzerland or Germany  I have never seen any documentation as to when he immigrated exactly - but the first record that I know of is his marriage to Elizabeth Teysinger on 22 Apr 1766 in Lancaster Co., PA.  So, I would assume that he was probably born about 1740 because men were generally older when they got married - 16 seems an unlikely age for a male to get married for the first time. I know that Abraham served as a Private in the Revolutionary war in Michael Reader's company from Virginia and seemed to die before the end of the war in 1781 - when his will was recorded in Shenandoah Co., VA.  I know that my ancestor, Abraham Pitsenbarger, Jr ended up in West Virginia and some of the other descendants later ended up in Ohio and Missouri.  I have often wondered how many Pitsy cousins might have changed the spelling of the name to distinguish themselves

My grandfather was Oliver Richard Tannahill.  When I first starting researching the family, I found that it seemed to spelled primarily two ways - Tannehill and Tannahill.  Later on, I came across the work of James Tannehill "Genealogical History of the Tannahills, Tannehills and Taneyhills".  I soon learned that many of the different spellings came from honest mistakes and legal documents.  We all know that there are numerous misspellings that occur with census records because of the creative spellings of census takers.  If you were to inherit land or money in a will and the name was misspelled – would you argue about it.  Most likely not…so sometimes the misspellings came from wills or deeds.  Sometimes the names change because of personal preference.  My Tannahill line’s name was spelled with “e” until the mid-1800’s.  Most likely all Tannahills came from a Thomas Tannahill who lived in Scotland in the 1500’s.  Immigration for some occurred in the 1650’s because they were essentially indenture servants.   Some came through Canada later on in the 1800’s  I would be interested in seeing more DNA research with these branches to see if we truly are all related which is what the current research shows

My ancestor, John Gallop immigrated in 1630.  Most Gallup descendants descend through his son who went by John Gallup.  It is interesting that when you come across someone who spells their Gallup name as Gallop almost all descend from Nathaniel Gallop, the older son of John Gallop (the immigrant)

There are other examples in my family lines…but it is an obvious mistake that is made by many researchers.  If a researcher doesn't research alternative spellings, they are possibly missing some important research leads.

Posted by CarmenMJ at 8:34 PM No comments:

For several years, I have had times that I have spent a lot of time scanning pictures.  Every once in a while I come across a surprising photo...something that we might call a photobomb today!

It was 1982, and my great grandparents were celebrating their 65th Wedding Anniversary.  They requested that my mother pick out a song and play and sing for them.  This put a lot of pressure on my mother - not the performance side, because she was a natural performer - but trying to find the perfect son, that was a struggle.  I remember her going through her music for several weeks picking one song then discarding it, all in the goal of finding the perfect song.  Finally Mom made her decision....she played "True Love" from High Society (a remake of The Philadelphia Story with Bing Crosby, Grace Kelly and Frank Sinatra).

The time came for the day of the party.  It was held down at the Lewiston Lyons Club.  Mom's performance was well received and remembered.  My great grandmother was thrilled with Mom's song choice. I remember that I was about 15 years old, and it was really the first time that I was helping out in the kitchen and spending time doling about punch at the punch bowl.  I remember that my great uncles - Cap and Wayne were teasing me to no end that I wore that dress on purpose because it matched the punch.  It was neat feeling that day though - I felt like I had moved to a different place in the family.  Working in the kitchen with the rest of the women in the family was an educational experience.  Mostly because I heard and learned things about family dynamics that I never would have learned otherwise. When family members think about this reunion, the photo below is what they think of.  It is a special photo made even more special because it was the last photo of the oldest nine children, Aunt Norma died a few years later.

However, there is a one photo that presented an unexpected surprise.  Someone was taking a picture of me...and in the background of that photo I can see a lot of familiar faces including Uncle Wayne Larue, Aunt Jeanne Shawver Renz, cousins Karl Gage and Ivan Gage and there in the background is my mother.  Mom had a great sense of humor that didn't usually show itself in photos.  Probably because she disliked having pictures taken of her so much - but there in the background is my mother, waving a paper plate with a great look on her face.  (Click on the picture and you can see the photo larger) I think one would say that she is photo-bombing the picture...of course it wasn't even a word back then! 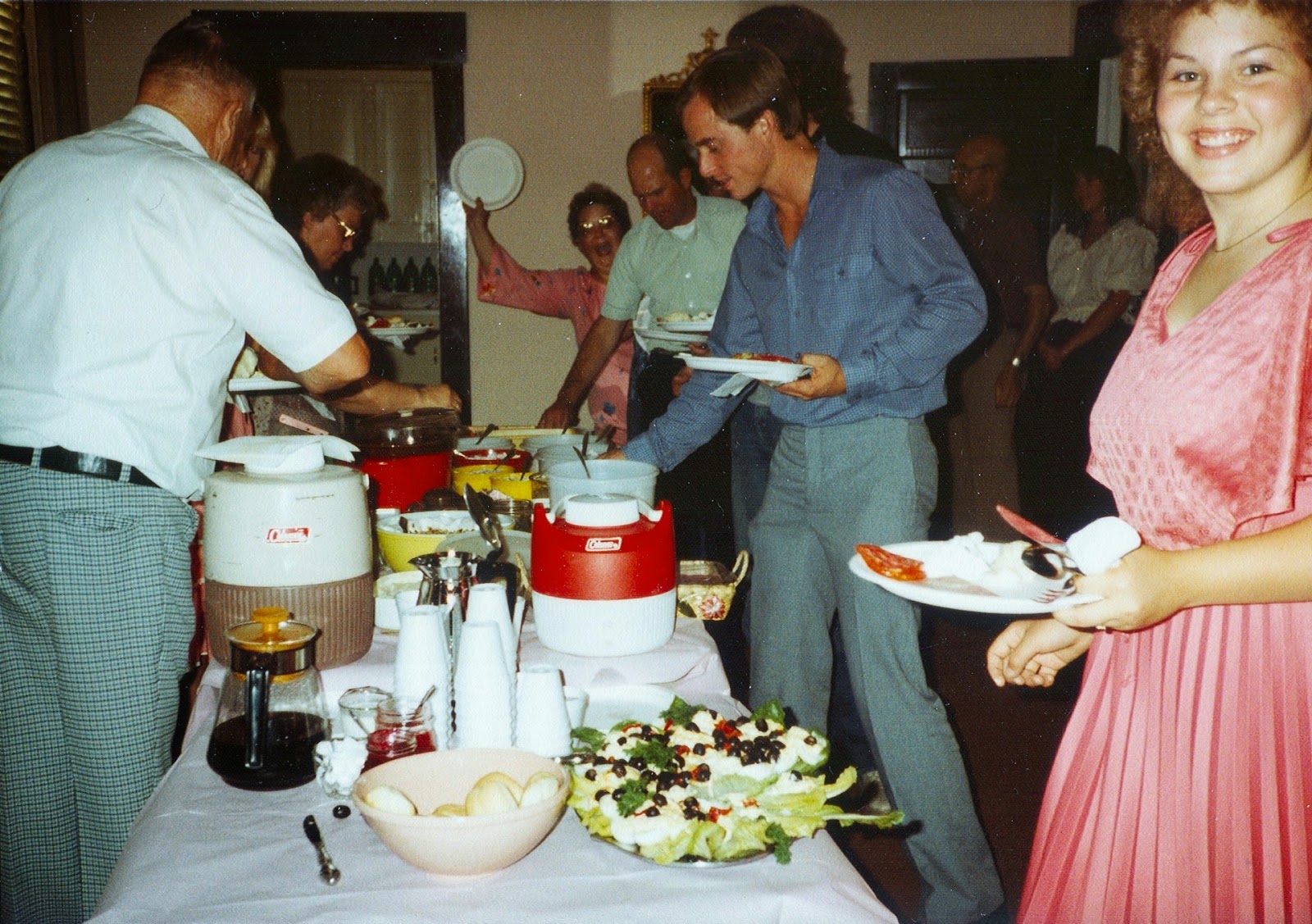 Posted by CarmenMJ at 9:09 AM No comments:

Email ThisBlogThis!Share to TwitterShare to FacebookShare to Pinterest
Labels: Gage

When you research a family member from the 1800’s, you are never quite sure what you will find – especially if it is a female ancestor.  My great grandmother was Shirlie Louisa Pope and when we initially went back to North Dakota, the goal was to find at least whatever remained of the cemetery that she had been buried in.  (She was buried in the Old Dunn Center cemetery in North Dakota and sometime in the 1930’s, the family was told that they needed to move her grave as they had found out that the cemetery was on top of a burning coal mine.  There was no money to make the move, so she remained in an unmarked grave at the old cemetery.)  I had known about Shirlie since I was a child…nothing terribly concrete but the photo from my childhood gave me a mental image of her.  When I first started researching her background and had made some contact with cousins, it was with a great deal of enthusiasm that I began to research her family.

Shirlie was the daughter of Winslow Lonsdale Pope and Nancy Ann Marie Lyons.  I must admit that the Pope side was fairly easy to research.  Within a few weeks after I started researching the family, I made contact with cousins and had the Pope family traced back to literally the earliest settlers in New England. Winslow’s wife, however, took a lot more research.

Nancy Ann Marie Lyons was my great great grandmother.  She was the daughter of John Nathan Lyons, Jr. and Mary Elizabeth Reed.  I know than Nancy was born on 6 Mar 1855 in Bath, Grafton Co., NH and died on 30 May 1906 in Washburn, McLean Co., ND.  (My cousins took me right where she was buried in a little country cemetery called Sverdrup near Washburn, ND) 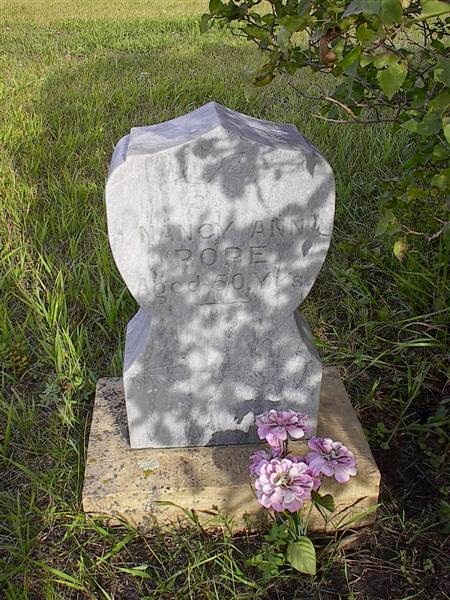 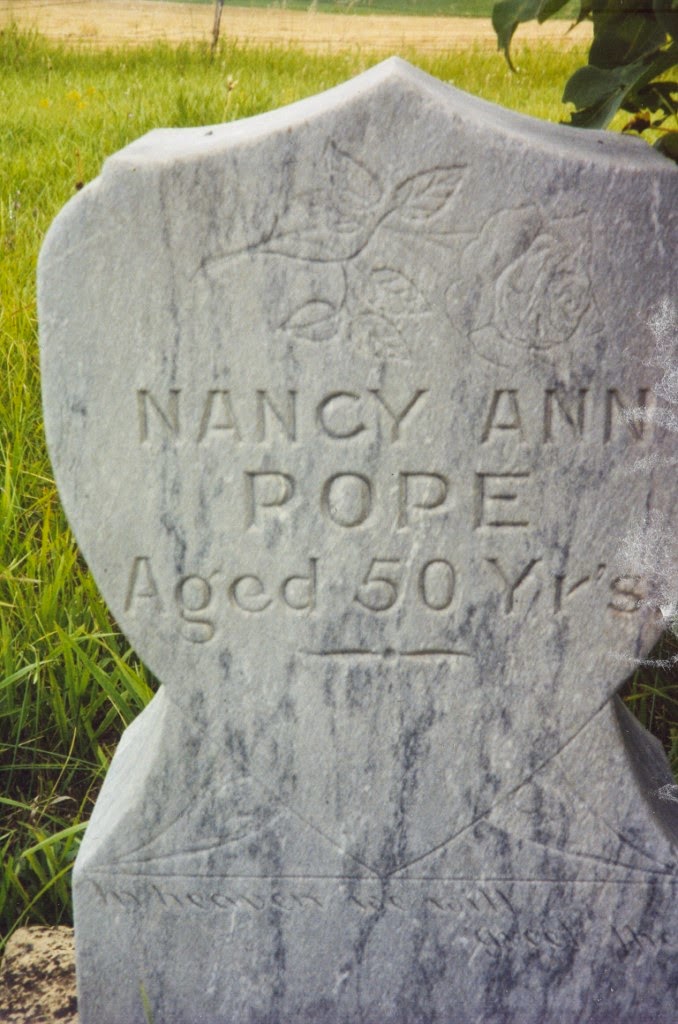 She was married to Winlsow Lonsdale Pope on 19 Mar 1881. I have to assume that she was fairly sickly the last few years of her life, as she died of tuberculosis.  I am also sure she must have been considered a spinster when she married because she was 26 years of age.  Through the census records, I could tell that she spent all of her young life growing up in Bath, Grafton Co., NH.   I was fortunate to find information on her parents, but beyond a few census records, I hit a brick wall during my first few years researching them.


John Nathan Lyons Jr was b. 23 Apr 1820 in Randolph, Norfolk Co., MA and d. 7 Apr 1911 in Bath, Grafton Co., NH.  It wasn't until I got his birth certificate that I was able to find that his parents were John Lyons and Mary French.    Here is more about his family  (Chink in a Brick Wall – John Lyons and My Irish Ancestor – John Lyons )  I know that he married Mary Elizabeth Reed on 21 Dec 1845 in Fairlee, Orange Co., VT.  From census records, he is listed as a wheelwright and I also know that he remarried after Mary Elizabeth Reed’s death to Elizabeth Snow on 23 Mar 1893 in Manchester, NH.   He died at the age of 90 and was buried in the Warren Village Cemetery in Grafton, NH.

Mary Elizabeth Reed was more of a challenge.   I had her name from family records that had been passed on to me, but there was not going to be an easy to way to figure out who her parents were.  For one thing, Reed is a very common name.  For several years, I explored news-lists, emailed other researchers and came to the conclusion that she was most likely the daughter of Samuel Reed and Nancy Chase Swett.  It wasn't until last year when www.ancestry.com published some new records – specifically The New Hampshire Death and Disinterment Records, 1854-1947 that I was able to finally prove my theory.

There was the record for Mary Reed Lyons death which listed her date of death, age, cause of death and her parents as Samuel Reed and Nancy Sweet (which is a common misspelling for Swett).  I also learned that she died of “Brights Disease” which is kidney disease.    I admit that it was very satisfying to learn that my theory had paid off.  However, once you confirm one theory…now you have the challenge of pursuing her parent’s ancestry…but that is another story.

Here is a list of the children of John Nathan Lyons, Jr and Mary Elizabeth Reed: