It has been my experience that most of the Penningtons that I have found around Smyth and Washington Co., VA descend from Andrew Pennington and Hester Blevins.   Sometimes trying to figure out where some of these Penningtons fit has been a struggle.  While there may be some argument as to who Andrew Pennington's father was - there is no doubt that his descendants left a stamp on the region.

Abel Abram Pennington is the oldest son of Andrew Pennington and Hester Ann Blevins.  He was born 17 May 1836 in Ashe Co., NC and d. 18 Sept 1920 in Washington Co., VA.  I suppose that there is a clue as to the identity of Andrew's father with the naming of his oldest son.  Only problem is that Abel and Abram were supposedly brothers and Abram is considered by most to be Andrew's father.  Anyway Abel was married to Emily Blevins on 16 Oct 1861.  Emily would have been Abel's first cousin.  Her father was Daniel Blevins and mother was Lucy Ann Dickson.  (Lucy was the daughter of Johanna Pennigton and Douglas Dickson).  They had two children in two short years and Emily died in 1866.  Perhaps the reason there weren't any more children after 1863 is because Abel enlisted into the Confederate Army during the Civil War.  Abel must have gone back to live with his parents after his wife's death because he is recorded with them in the 1870 census with his two children.  In 1871, Abel remarried to Sarah V. Able.  Sarah was born on 17 Mar 1848 in Johnson Co., TN which is a neighboring county to Washington Co., VA.  She was the daughter of Leander Abel and Mary Ann Bush.

In some census records Abel is listed as Abram or Abraham and in others he is listed as Abel.  He is listed as Abel in the pension that was given to his widow after his death, so I suspect that Abel was his first name.  Abel's pension lists his cause of death as Pleurisy and he is buried at Green Cove Baptist Church Cemetery in Green Cove, Washington Co., VA (Find A Grave #18709078) His second wife, Sarah survived him by 9 years and died on 19 Mar 1929 and is buried in the same cemetery.  Something of interest is that Sarah's younger brother married her step daughter, Malvina Elizabeth Pennington.

Abel Abram and Emily Blevins had the following children:


Abel Abram and Sarah Able had the following children:

It is no surprise to anyone who knows me that I take Christmas rather seriously.  I love just about everything about it from the decorations, to the candy and cookies, and the music.  I love giving gifts to my family and while wrapping isn't my favorite thing, it is made bearable by Christmas music helping the time go by.

Perhaps the reason I love Christmas so much is because of my Mother.  She made Christmas special at our house.  The house was always decorated, Christmas music was always playing and the house always had many of the wonderful smells of cookies and candy.  Mom made everything from scratch and taught me how to make many of the family favorites.  Of course, I have brought a few of my own recipes to add to the tradition.

So, now as I am trying to finish the preparations for Christmas, my mind wanders back to some of my favorite memories...and I have already written about a few of them:

Posted by CarmenMJ at 1:36 PM No comments:

Email ThisBlogThis!Share to TwitterShare to FacebookShare to Pinterest
Labels: Christmas

I have West Virginia roots…deep roots that stretch back to the 1700’s.  I can’t say that they have been all that difficult to find because my great grandmother had pretty good notes about her family’s ancestry.  What has been difficult, is to ascertain which family belongs with which.

One of these confusing family lines is that of my 4th great grandmother Elizabeth “Betsy” Nutter.  Anyone who has spent any time in genealogical research has to realize that Elizabeth might be one of the most common names and the most common nickname was Betsy.  Betsy was born on 21 Jun 1790 in Monroe Co., VA today, WV.  She died on 20 Apr 1869 in Leander, Fayette Co., WV.  On 19 Apr 1810, she married Thomas Jefferson Legg in Monroe Co., VA.  She was daughter of David Nutter who was most likely born in 1769 in Somerset Co., MD and died in 1851 in Nicholas Co., VA (WV).  You might say, that David Nutter is probably one of the main causes of all the confusion.

David married Ruth Cottle on 13 Jan 1789 in Monroe Co., VA.  She was the daughter of William Cottle and his wife Elizabeth.  They quickly, as was customary, started their family and had 10 children between 1790 and 1810 when she died on 10 July 1810 probably from childbirth with her youngest daughter, Malinda.  She was buried at the Old Rehoboth Methodist Church in in Union, Monroe Co., WV – you can view what is left of her gravestone at http://www.findagrave.com/cgi-bin/fg.cgi?page=gr&GRid=22084644

David and Ruth’s children were:


Seven years after the death of his wife, David Nutter married Christina O’Dell on 3 Aug 1817, daughter of Jeremiah O’Dell and Rachel Walters.  She was b. 28 Jan 1790 and d. 19 Aug 1891.  She was just five months older than David’s oldest daughter.

They had the following children:

Within these 17 children of David Nutter, you can find some of the most prominent families of Nicholas & Fayette Co., WV.  My own family includes Nutter, Legg, Pitsenbarger, Amick and Shawver but O’Dell, Dorsey, Brown, and McClung are also prominent families.  If you go a little deeper, you will also find Ramsey, and Walker.  The lines get even more tangled the more you dig in.  You might say that David Nutter with his 17 children was definitely one of the founding fathers of Nicholas and Fayette Co., WV.

My line goes back to him this way:


My cousin sent me this photo several years ago and while I originally thought it was from a later date, now I am not so sure.  Supposedly it is a photo of Claude, Baxter, Maude, James Richard "Dick", Thomas Roby and  Charles Frederick Dollar and was taken in 1915. However, I am fairly sure that the older boy is not Claude Dollar as he would have been twenty five years of age.  So, I wonder who the older boy is...in fact I really can't be sure of any of the cast of characters.  If the youngest boy was Charles Frederick Dollar, then it has to have been taken either in 1915 or 1916 since Charles died on 4 Jul 1916.  Roby could certainly be the next oldest boy and James Richard or "Dick" could be the next boy and the girl is probably Bonnie, then Baxter...but the oldest boy escapes me.  It is a sad picture because Charles died at a young age and it is the only photo that I have seen of him! 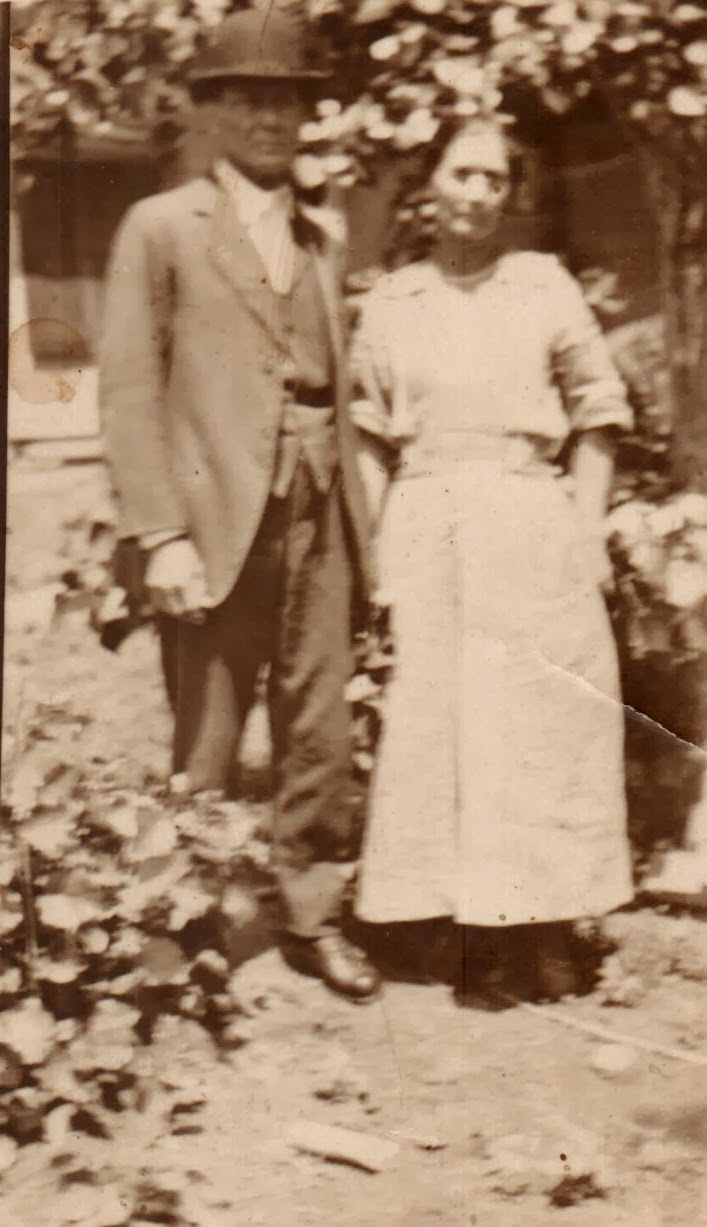 This photo is labeled as John Dula Dollar and sis...it could be either Emmaline or Amanda  - I can't tell for sure.  I don't even know the vintage of the photograph.  I suspect sometime around 1910.  However, it is one of the few photos that I have of my great great grandfather. 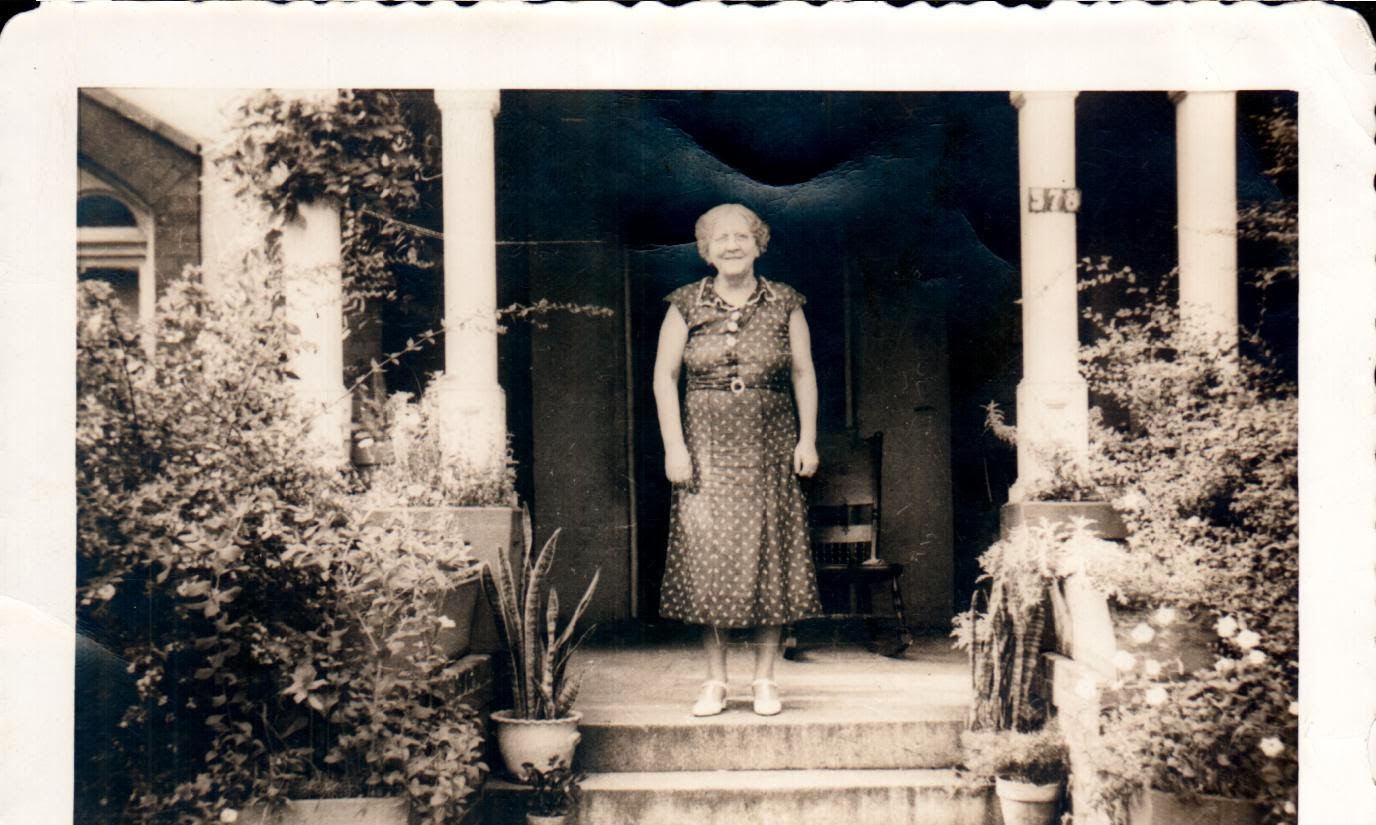 Photo of Cleopatra Josephine Gentry Dollar probably taken around 1940.  Photo is labeled as Pate - which was the name that my great grandmother's older sister referred to as her step-mother.  As I understand it - it wasn't with a fond recollection of her.

There are a lot of questions that I wish that I could ask about this photo.  It is labeled Bonnie, Lena Dollar, Maude, Cassie & Dick at the old mill where John Dollar family lived and worked around 1908-09.  I don't know where this mill was...I believe the photo was probably taken around 1970 and I can't be sure it is still there.  Bonnie, Maude and Dick were children of John Dula Dollar and Cleoptratra Gentry's children and Lena was their first cousin and daughter of Roby Dollar.  Below is a larger picture of the mill with Dick Dollar in front. 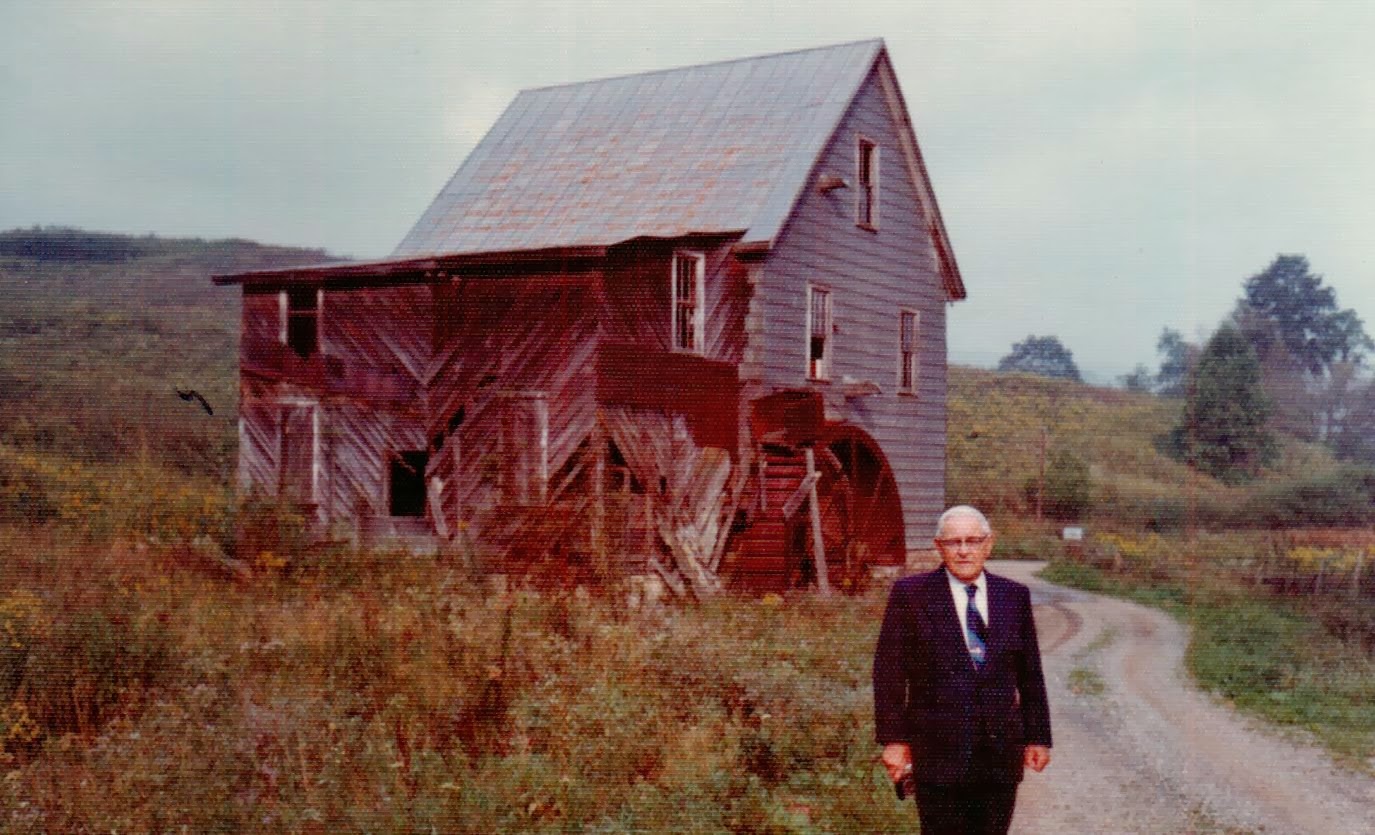 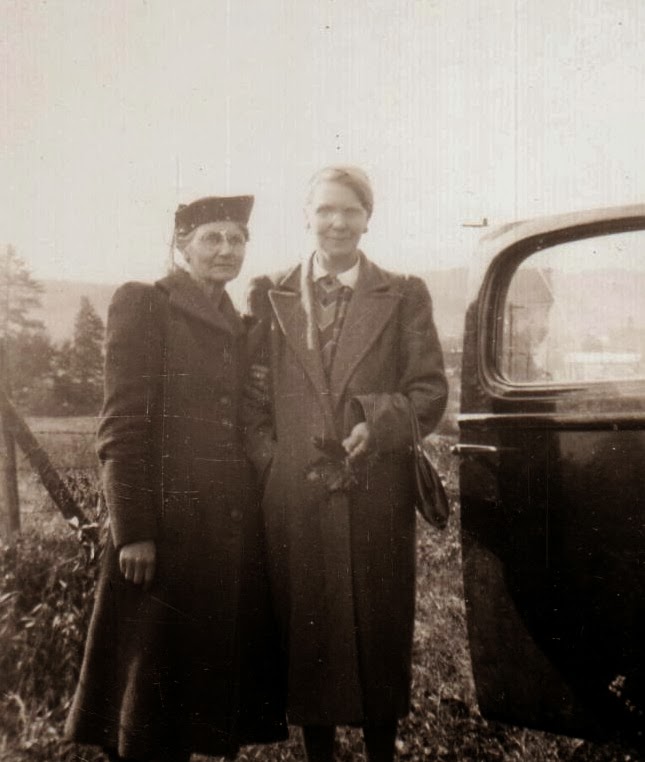 This is a photo of Bessie Dollar Barker and Sophie Dollar Friddle - my great grandmother.  Neither one of these women were over five feet tall. 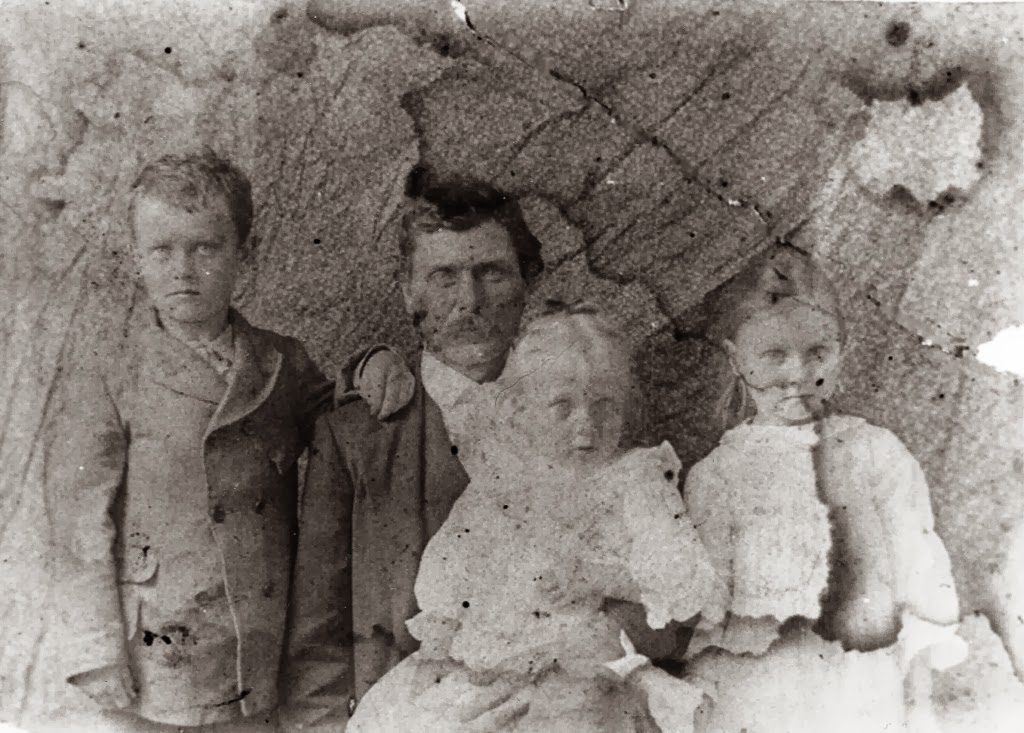 Probably taken about 1895 - the only photo I have of Claude, Bessie and Grandma Sophie with their father, John Dula Dollar. 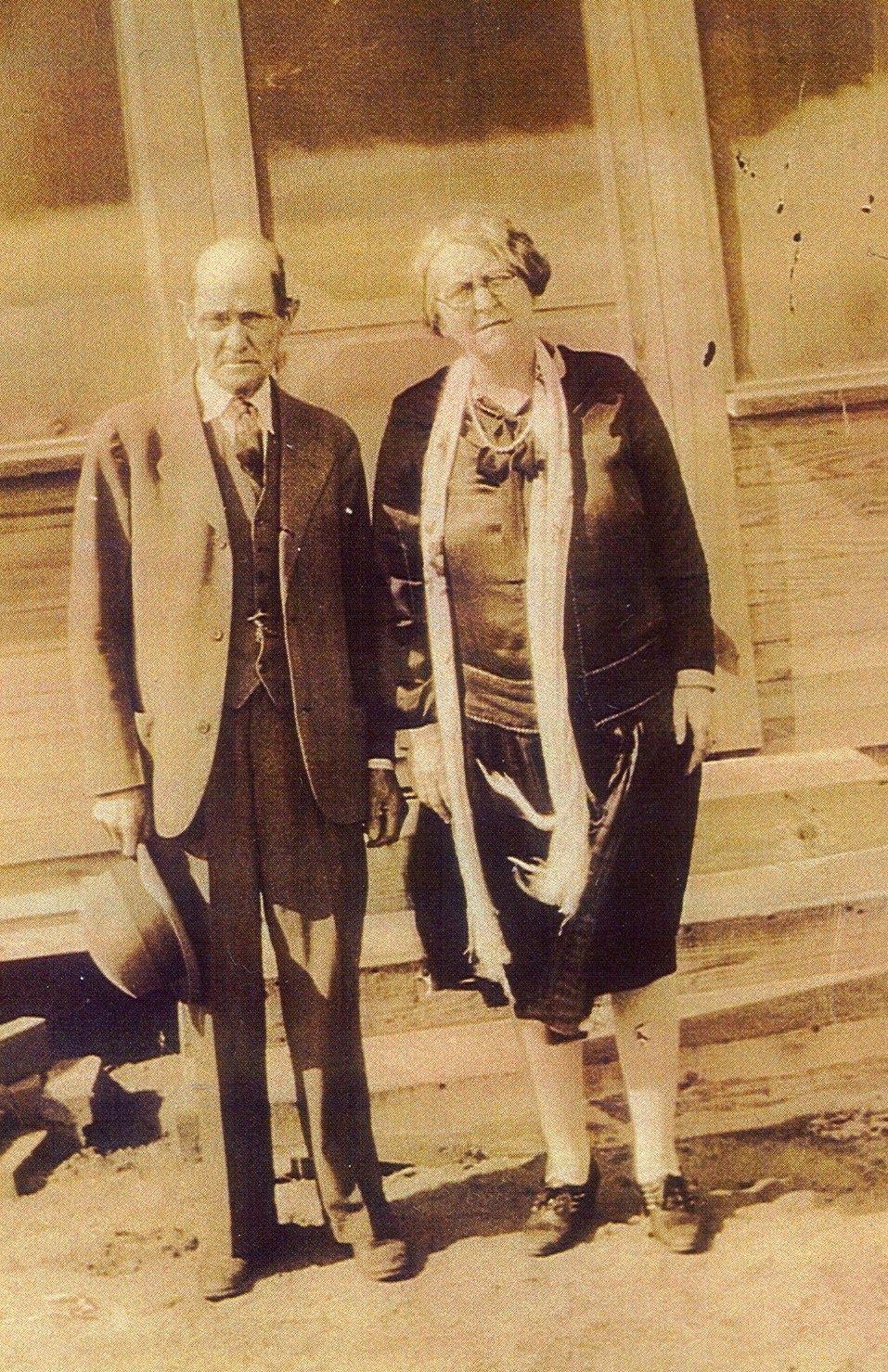 John Dula Dollar married Cleopatra Josephine Gentry on 28 Mar 1897 and they were the parents of: