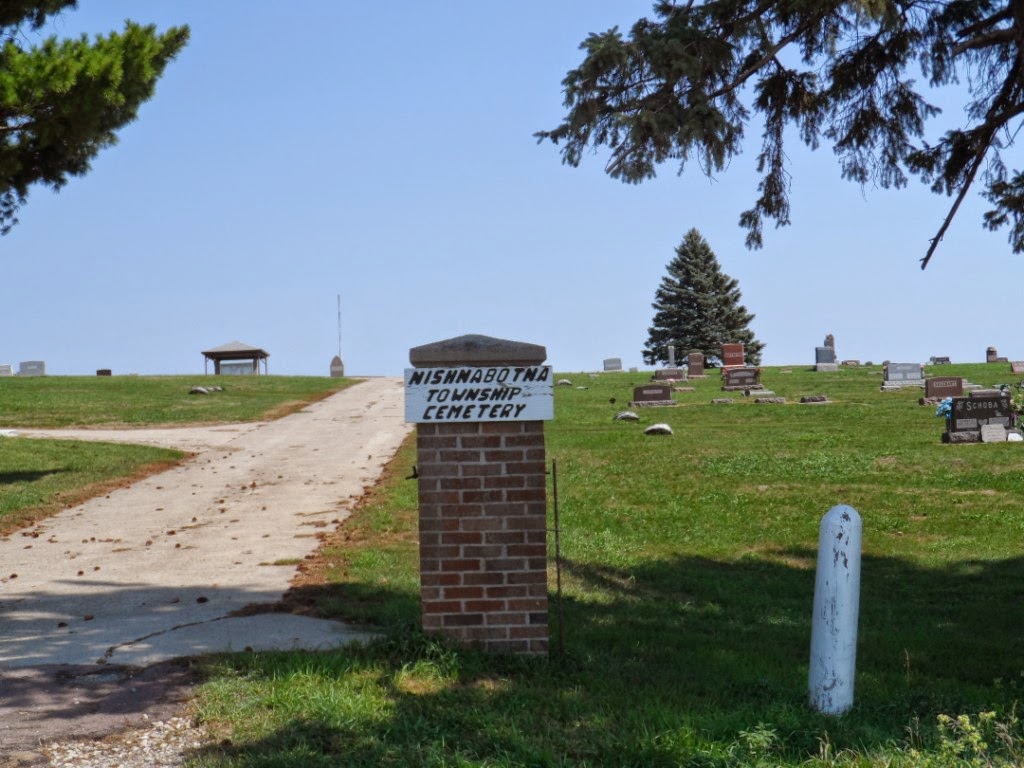 After Dad and I had left the town of Kirkman and the Rose Hill Cemetery and headed down the road to Mapleton, Iowa, we were chatting about some of the other Johnson family.  Buried at Rose Hill was Washington and Mary Ann Smith Johnson and their daughter Margaret "Maggie" Johnson Rank with a few other family members.  The majority of the other Johnson children had left the Kirkman area, but there was one that I was curious about.  So, as Dad and I drove down the road, I brought up the Johnson family on my tablet and looked at the rest of the children.  Nicholas Keffer Johnson had also lived his life in Iowa.  It seemed that just as I said that Nicholas had died in Denison, Iowa, we saw a sign that pointed to the right saying Denison - 2 miles.  We made the quick decision to head down the road, thinking that the cemetery couldn't be too hard to find.  We immediately found that it wasn't - it was up on the hillside to the left of the road not too far after the turnoff from the highway.
So, Dad and headed into the cemetery and were somewhat shocked at how large the cemetery seemed to be, for such a small town.  Much to our delight, we found a board with all of the inhabitants listed.  I must say, I love Iowa cemeteries :) 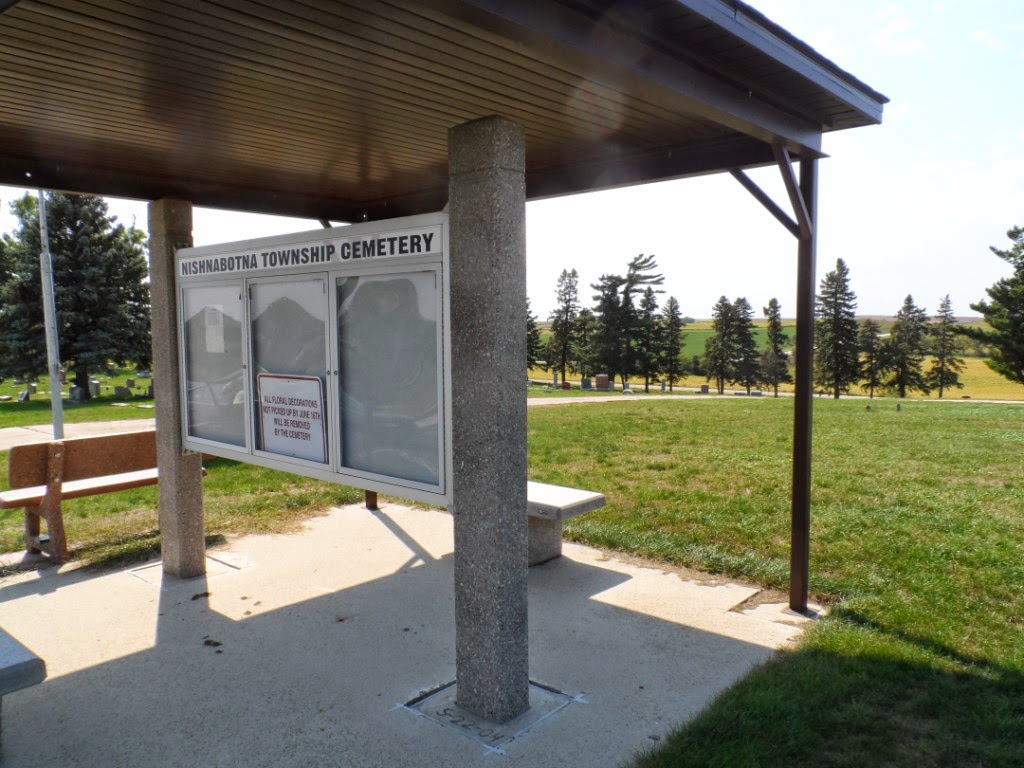 Nicholas Keffer Johnson was the second youngest of eleven children.  When I was much younger, these were pictures that I had seen in an album who I had know idea as to who they were.  Nicholas was the younger brother of my great grandfather, Ulpian Grey Johnson and they were both the children of Mary Ann Smith and Washington Abraham Johnson.
Nicholas was named after Mary Ann Smith's brother, who was a half brother and minister who lived most of his life in Tennessee and Georgia.  Nicholas was born on 28 Apr 1876 in Kirkman, Shelby Co., IA and died at the age of 74 on 25 Mar 1850 in Denison, Crawford Co., IA.  Nicholas married Lillie Ann Baker on 24 Jun 1913 in Dension.  Lillie was born on 17 Mar 1880 in Vail, Crawford Co., IA to George Homer Baker and Ella Mabel Ballou.  She died on 31 Oct 1872 in Dow City, Crawford Co., IA.


Keff & Lillie had two children and only one who survived to adulthood, their daughter, Grace.  We were able to very quickly find the graves of Keff and his family, just a short distance from the sign directing us to the location. 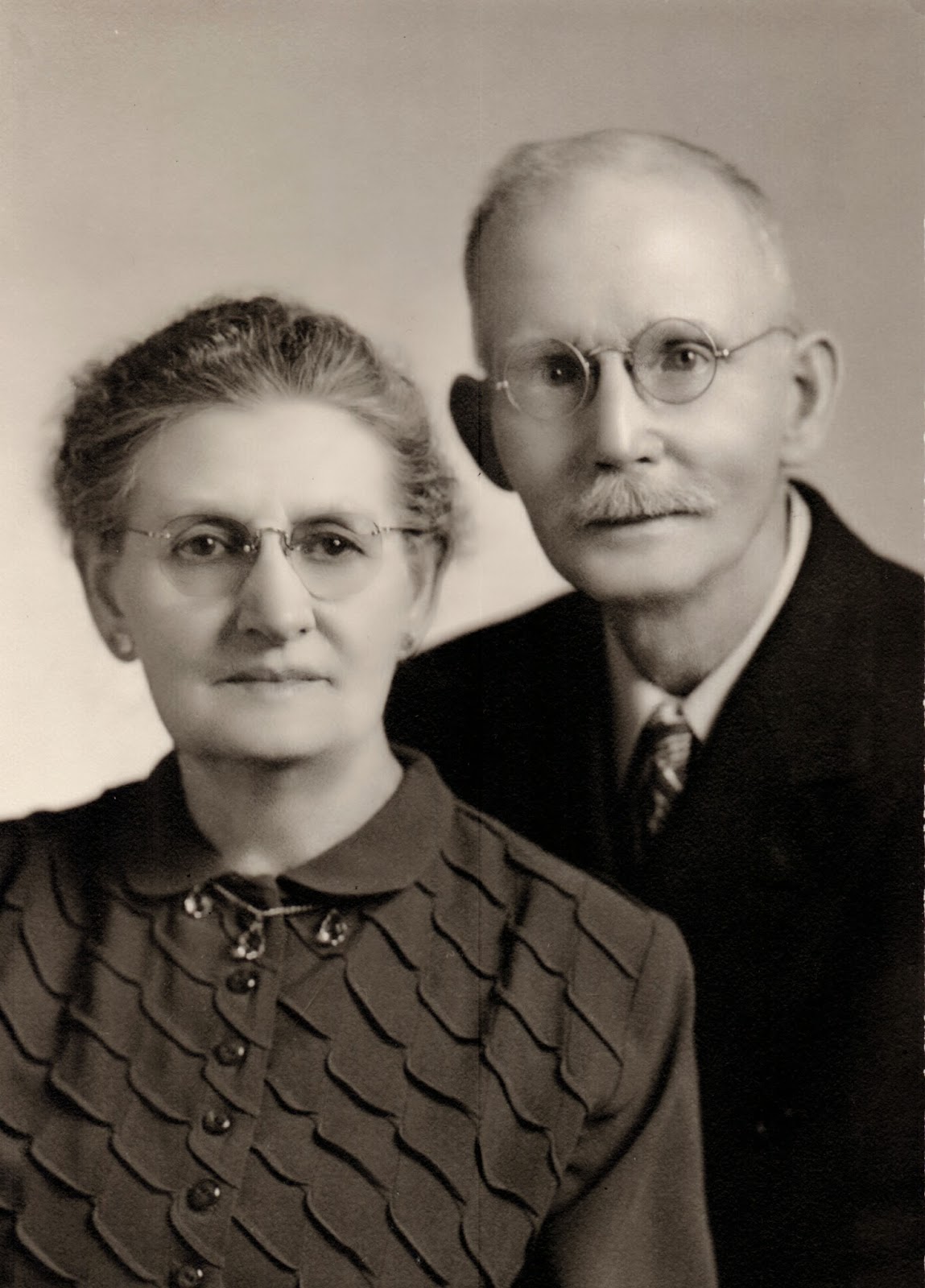 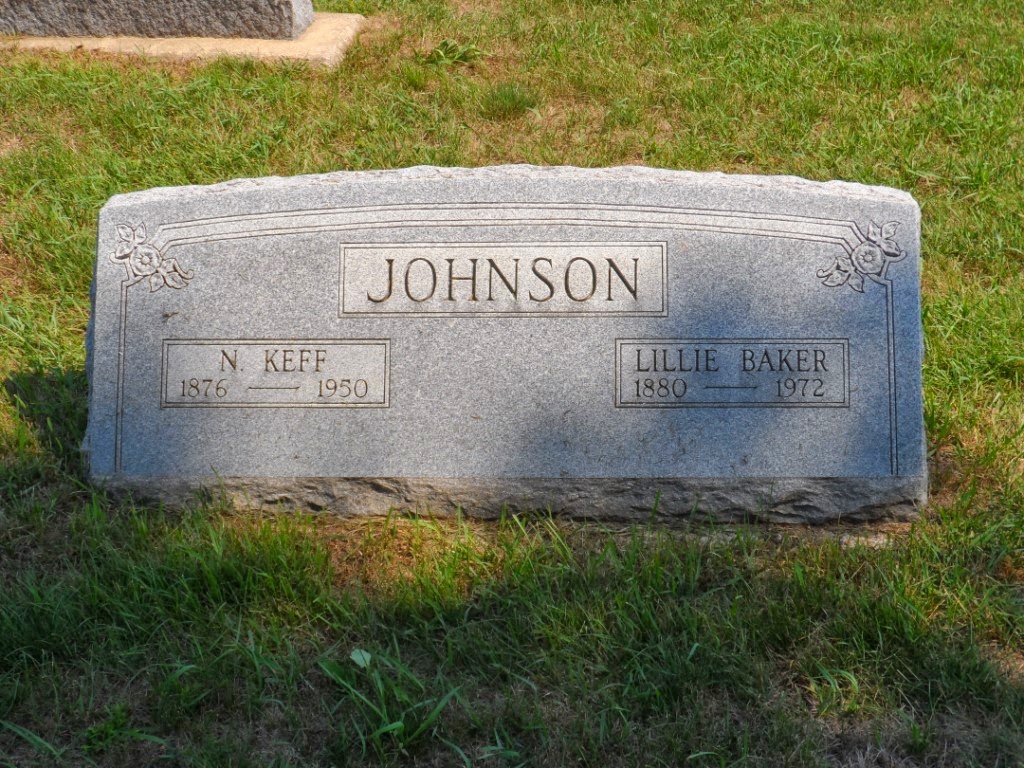 I can't tell you how much, I appreciated the opportunity to see the landscape where my ancestors and their families lived...even if it was a relatively short time before my own.  It is easy to get lost in the names, places, dates and other records while researching family members.  I was glad to perhaps get a bit of perspective on where my great grandfather grew up and where some of his family stayed.  I must say, I thought it was a nice place.
Posted by CarmenMJ at 7:00 AM No comments:

There is no doubt in my mind that I have some fabulous women in my family.  I have been fortunate that I have had the opportunity to know them and appreciate who they are and what they have done in their lives. I am also incredibly lucky to have a library of photos to draw from where I can see them at almost any age.

First there is my beloved Great Grandmother (Florence Christine Shawver) who is technically a Shawver, married Granddad Gage on 4 Sept 1917 and they remained a devoted couple until  Granddad died on 30 Dec 1990 - they had been married for over 73 years.  When the first of her children were born in the late teens and twenties, I'm sure there were hard times, but I also suspect they were very happy years.  Then the depression hit and like everyone else, they also had very hard times.  They uprooted their family from the farm in Iowa, because Granddad couldn't pay the taxes and went first to South Dakota and in 1935 traveled across Montana in November to reach Dover, Idaho. It wasn't until later that year that they had bought land and had build a house on Hatter Creek, ID.  Grandma Florence's oldest daughter was my grandmother Marian who we lost a few years ago at age 91.  Then came Elaine and Pauline, who are both still going strong.  The youngest daughter, Norma, died 30 years ago of cancer.  All four of these women were strong women who could work and did work just as hard as a man did.  I think the farm wife probably worked much harder and longer than her husband - especially when you add 10 children to that mix like my great grandparents had.  My great grandmother was born on 14 Jun 1897 in Lyons, NE and she lived to be 93 years old...just a few months short of 94.  These are just a few of the wonderful photos that my great grandmother had.

During the past few weeks, I have been taking the opportunity to watch the many D-Day documentaries that have been on TV.  Some of them are a few years old, but several have been made in the past year.  I can't help thinking how great it is that some of these stories from these veterans are being recorded.  The youngest of these veterans is either 90 or close to 90.   I think that I read that there are only about one million of these World War II veterans still alive.

While neither of my grandfathers fought in World War II because they were farmers.  Someone had to stay home and grow food.  I had three great uncles on my Dad's side of the family and two great uncles on my Mom's side of the family who also fought.  All but one of them fought in the South Pacific.  Only Claude fought in Europe...I really never heard him talk that much about World War II and his experiences.  I assume that it wasn't a topic he liked to talk about especially with his young great niece.  I heard him tell a few stories through the years and I think the thing that might have bothered him most was seeing all of his buddies flying on bombing runs to Germany...and the sad fact that so many never came back.

I have to wonder what he was thinking on the eve of D-Day 70 years ago.  I imagine he really didn't have an idea what he was going to face.  I think that this was his first major battle and there is something to be said about not knowing what he was about to face.  Claude was a 20 year old man.  He had graduated in 1942 from Lewiston High School in Lewiston, ID.  He signed up in 1943 and was worried enough about how his mother would react that he asked his father to tell her.  Claude was a member of the Tank Destroyers in the 1st Army.  I think his division later became part of the 9th Army and fought under General Patton through the Battle of the Bulge. But on that long ago day, Claude was waiting just like so many other soldiers.  His division was on the second wave at Omaha Beach  From what I have read, the biggest difference between the first and second wave was sheer numbers  By the time the second wave came along, they still hadn't put out the guns on the cliffs above Normandy

It isn't like I have heard a lot of direct information from my great uncle...and since he passed in 2011, there is no further opportunity.  I can't help it that when I am watching these documentaries about D-Day - I still wonder if I will ever see a glimpse of Uncle Claude's face in any of those films.  I doubt it.  This is a significant anniversary - I wonder how many more years we will have where we will have living veterans from D-Day. So, today I will spend some time thinking about as my mother called him - her Uncle Buddy...and marvel at what he and all those other young men faced and accomplished 70 years ago on Omaha beach on the Normandy coast!
Posted by CarmenMJ at 7:00 AM No comments:

A Picture that Started a Wonderful Friendship

This is a familiar photo to many in the Shawver family - perhaps without even realizing it.  It was on the Shawver family cookbook that was published many years ago.  I think it is a rather cool picture as did my mother.  We posted in on our website when we first started setting up a genealogy website.  One day we received an email from a gentleman who said that they photo really brought back some memories.  It reminded him of some pictures that he had seen from his Aunt Jessie.  Mom replied back to him and asked if her name was Jessie Bacon...he replied that "why yes it is!"  So began a wonderful friendship.  His name was Earl Bacon and I think his grandfather was the brother of Aunt Jessie's husband.  Anyway, Earl had a wonderful sense of humor and sent the most wonderful jokes.  Then there were the emails when he and Mom talked about their families and what was going on in the world.  We never met face to face - but we had a close friendship.


Then one day, I had to email Earl Bacon and let him know that Mom had passed away.  However, we continued to receive jokes and the odd email for the next year until one day we received an email from his son telling us that Earl had passed away.  He thanked us for all of the jokes and stories that we had passed along the way - I told him that it was us who needed to thank Earl.  It was nice to know that our fond feelings were reciprocated.  I would like to think that Mom and Earl are up above and still trading the odd joke back and forth as well as the family news.  That wonderful friendship was all started because of this picture and chance sighting on the web!
Posted by CarmenMJ at 10:07 AM No comments: