We have always made a big deal out of Memorial Day in our family.  It was a time of work, visiting and family...that usually involved visits to the cemetery.  You might say that those memories helped me enjoy family history even more than I already do...because I remember those stories and there aren't a lot of family members who do anymore...because those are some of the graves that I visit.

My grandmother, Capitola Friddle Tannahill Shearer (FAG  #38384311) died in August of 1985 and she is buried up at Lewis Clark Memorial Gardens in the Lewiston Orchards (Lewiston, ID).  Shortly after she died, Grandpa Gwen asked my mother if she would like to have her father and brother (Bab Boy Shearer - stillborn - FAG #132465265) moved up to be next to Grandma Cappy.  Richard Tannahill (FAG #38384361) was my mother's natural father who died when she was six years old.  He was also Grandpa Gwen's best friend.  Mom said that when she was a child, she could always talk to Grandpa Gwen about her father.  Grandpa Gwen and my Mom ended up having a special Father/Daughter relationship.  I know that he is my step-grandfather - but he is the only grandfather that I have known.  When Grandpa Gwen asked Mom if she wanted her father moved to lie beside Grandma, I think it was something that she really didn't know she wanted.  So, the arrangements were made.  The funeral home even asked Mom if she wanted to be there when Grandpa Richard was exhumed...Mom said "Absolutely not!!!"

I have never forgotten Memorial Day in 1986.  My mother went all out - she gathered all of the funeral containers from Grandma Cappy's funeral and filled them with the roses that we already had blooming.  When we picked Grandpa Gwen up and went to the cemetery, you could tell that it was especially emotional for him.  I wasn't used to seeing that side of him, so it really made an impact. We set up a chair in front of Grandma's grave so he could sit, and then Mom went to work. Once we had finished decorating Grandma Cappy's grave, the baby's and Granny (Nettie Pearl Moody Shearer FAG# 62326075) and Pop Shearer (Floyd David Shearer FAG#62326029), you could tell that there was a comforting look of satisfaction on his face.  He then made the statement that "it was how it should be...Mama (Grandma Cappy) should have both of us with her!"  Grandpa Gwen then added "but there is no hurry to get there!"  I think that the month of May had been an especially difficult month in many ways.  My brother had graduated from college and I had begun my first year of college.  My grandparents had given us the opportunity to go to college without having to worry about the money to pay for it.  They also helped with a scholarship with Dist. 241 in Idaho Co., ID that gives one student out of each school a scholarship to the University of Idaho and to date there has been over 90 students who have gone to school with the Shearer Scholarship.  (See Graduation Day) The University of Idaho graduation of 1986 not only included my brother but some of those first students who had received the scholarship.  It was a bittersweet day because Grandpa Gwen had lived to see that day and attend that graduation, but my grandmother had not.

After we had gone and taken care of the graves down at Normal Hill Cemetery - (see OK, Pop, Turn Over and The Gravestone) we went out for an early dinner.  Grandpa Gwen decided to splurge and have a steak.  He really didn't have that great of an appetite, but he certainly made a good stab at it...and although there was steak left, that was probably one of the best meals he had had in quite some time...and the rest went home in a doggie bag.  It had been a good day.  He felt that the graves looked good and was satisfied with the day and perhaps life.

That was the last Memorial Day he was alive...he died in January of 1987 and perhaps that was one of his last really good days.  Grandpa was diagnosed with Alzheimers later in 1986 even though we suspected that he had had it a long time.  Mom and I used to make custard for him to have for breakfast.  We started out with bowl that he could spoon out the custard with...and then we had single custard cups, since he couldn't remember how to spoon it out.

Today it is my father and I who take care of the graves.  We have my mother, her parents, her grandparents and my father's parents and grandparents as well as several aunts, uncles, a few cousins and friends.  Almost all of them represent something special to me.  So Memorial Day for me is a chance to still tell stories and spend some time with my family.  It is certainly a duty...but also something that I choose to do.  If I didn't, I think my mother would come back and haunt me!

Posted by CarmenMJ at 2:15 PM No comments:

There is no doubt that my 3rd great grandmother, Phoebe Allen Gage’s maternal lines are unmistakably German with a little Dutch thrown in.  I have a small knowledge of German (from high school German) and I find it endlessly fascinating to see how these names change and that I have two separate lines that have similar names.  I have seen the name Zeybel spelled as Zeybel or Seibel.  The Zeh name is spelled as Zeh, Zehe or See. Since I don’t live in the region and I really don’t have a strong knowledge – I have had to rely on other’s research and sometimes I certainly wonder what’s what!

My 6th great grandmother’s name was Anna Elizabeth Zeybel – she was born around April 1747 as that was when she was baptized in the Dutch Reformed Church (15 Apr 1747)  - her sponsors were Hannes Rikkert and Anna Elisabeth. Anna was married to Willem Truax on 17 Apr 1760 and they had 11 children.


Within those names above – I am not entirely sure that they are all spelled correctly, sometimes it is my best guess.  I got a lot of the information from a website no longer on the web called “The House of Truax” However, back to Anna Elizabeth Zeybel – her parents were either George or Jurrie Sybel and Anna Maria Reyin.  There are Dutch Reformed Church records that list their marriage on 12 Feb 1742 at the Schoharie Reformed Church in Schoharie, NY. (Jurrie was previously married to a Maria Engal Huls who was probably born about 1710 and d. before 1742.  She was the daughter of Christopher Hull and Eva Catherina and they had 6 children - all daughters) Jurrie’s parents are Jacob Zeybel d. 1735 and Anna Getha.  Jacob was born in Oberschild, Germany and his parents were Johann Zeybel and Catharina.  I have my doubts on these later generations as I can’t really research them because I really don’t have access to those records.  My best guess is that Jacob was the immigrant and probably came in the early 1700’s.

Here is a bit about the Truax family that I wrote in an earlier blog – Walloon’s to New Amsterdam
Annatje Truax was married to Peter Jost Zeh (b. abt 1770 d. aft 1830) and he was also of German descent and his family goes back a few more generations.

Their children’s names are:


Check out Descendants of Johannes Zehe/Zeh/See by Harold See for more info on the family.
This reminds me that I have a few books that I need to reference about these families.  I wonder if it was desperation with their current circumstances that forced them to leave their homes or the promise of a new life and opportunity.  The original Zeh family shows some of the heartbreaking consequences and danger of traveling on a sea voyage to America. Johannes and Anna Magdalena lost three children on that voyage and she was likely pregnant during that voyage as my 7th great grandfather was born in NY in September of the same year that they made the voyage. I have to wonder what those children died of...and how many others died during the journey.

I know that I have a considerable amount of German ancestry and that most of them immigrated in the 1700’s.  I assume that most of them are Palantine Germans and I suspect that there are many of us with ancestry in New York, Pennsylvania and West Virginia would find similar stories in our family histories.  Here is another earlier blog that I wrote about these ancestors: Palantine Family Roots
Posted by CarmenMJ at 2:21 PM No comments:

My great grandmother's family came from West Virginia. Most of her family lines were in West Virginia for all of the 19th century.  There are so many family relationships that sometimes it is easy to lose focus...because once you start looking it is almost like you go into a black hole and forget what your goal was.  This is one of the most complicated family relationships that I have.  I am directly related to Shawver, Nutter, Pitsenbarger, and Amick - and those families are intermarried and there are a lot of other names the fall into the mix like O'Dell 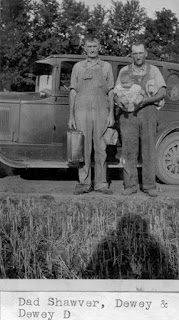 Isaac "Ike" Dountain Nutter is one of my earliest Dountain's.  He was born 11 Aug 1856 in Nutterville, Greenbriar Co., WV and died 21 May 1935.  His parents were John B. Nutter and Elizabeth Pitsenbarger.  John B. Nutter was the half brother of my 4th great grandmother, Elizabeth Nutter  (m. to Thomas Henderson Legg) and Elizabeth Pitsenbarger was the younger sister of my 3rd great grandfather, William Pitsenbarger.  Isaac Dountain Nutter was married to Mary Etta Walker and they had 5 children.

Pascal Dountain Nutter was born 18 Aug 1896 in Greenbrier, WV and died 14 Nov 1955.  He was married to Rebecca May Trout.  His father was Johnson Floyd Nutter whose parents were John B Nutter and Elizabeth Pitsenberger.  (See above) His mother was Elbina Catherine Nutter, who parents were Charles W Nutter and Sarah Pitsenbarger.  They had 14 children including Pascal Dountain Nutter, Jr.

Adam Downtain Bailes was born 13 Sep 1857 in Mt Nebo, Nicholas Co., WV and died 14 Oct 1886 in Nicholas Co., WV.  He was married to Rachel Anna Pitsenbarger who was the sister of my second great grandmother, Rebecca Jane Pitsenbarger.  They had 2 children.

Paschal Downtain Nutter was born May 1861 Greenbrier Co., WV and died 13 Jan 1897 in Greenbrier Co., WV.  He was the son of Levi William Nutter and Margaret Backus.  Paschal is the grandson of my 5th great grandfather David Nutter and his second wife, Christina O'Dell. (I am descended from his first wife, Ruth Cottle.)  He was married to Caroline Richardson and they had 5 children.

Of course then there is my great great uncle, Dewey Dountain Shawver born 25 May 1899 in Decatur, Burt Co., NE and died 18 Oct 1995 in Moscow, Latah Co., ID.  He was the son of George Christian Shawver and Rebecca Jane Pitsenbarger. Dewey was married to Alice Davidson and they had three children, including Dewey Dountain Shawver Jr aka "DeweyD".

I am not sure where the Dountain/Downtain name came from...but the name is interspersed with the Nutters and Pitsenbargers primarily but it also shows up in the O'Dell family which is closely tied with the Nutter family since David Nutter (my 5th great grandfather) married Christina O'Dell after the death of Ruth Cottle.  David and Ruth had 10 children and then David and his second wife had 7 more children.  Since the name mostly shows up among the descendants of David Nutter with the exception of Adam Downtain Bailes, it makes me think that there must have been local individual who was an important and/or beloved member of the community.  Perhaps someone can tell me who it might be.

If you would like to read more about Dewey Shawver's siblings and parents...check out:

Posted by CarmenMJ at 4:12 PM No comments: