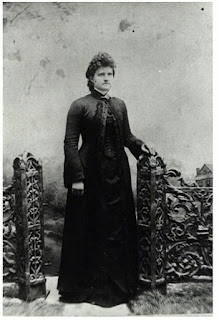 My 2nd great grandmother died 112 years ago in 1904.  My great grandmother was only 7 years old when she died...Grandma Florence was one of 5 children who lost their mother to tuberculosis.  Since, I have never been able to get a death certificate because they weren't available at that time, I have never been absolutely positive that it was tuberculosis or pneumonia.  Either way, I know that she died quickly at the age of 34 years of age.  There has always been a little bit of mystery about Frankie.  She was born Rebecca Jane Pitsenbarger on 28 Jan 1870 in Shawverville, WV.  She was the daughter of William Pitsenbarger and Mary Amick, the youngest of nine children.

All I knew for a long time was her name and a bit about her siblings.  There was some note that she had married a Moffat but nothing more than that.  For the past several years, I have thought that this Moffat might have been a just a story.  There was a mention in Grandma's notes and one in Uncle George's notes (her older brother.)  There was so much that we tried to piece together.  My Mom and I worked on the trying to figure out all of the characters in the story and I continued after she died. There has been bits of pieces that have come to surface that I could research on my computer on the internet.   It turned out that Frankie's parents were actually first cousins.  There was something that always stuck in my mind - wondering what the connection was.  William Pitsenbarger's mother's name was Elizabeth Amick (m. Peter Pitsenbarger)  and his wife's name was Mary "Polly" Amick.  At the time, I didn't think that was that common of a name.  Now I know better.  It turned out that Mary Amick was the daughter of Jacob Amick and Rachel Shroyer and it turned out that Jacob and Elizabeth Amick were siblings.  They were the children of Henry Amick and Elizabeth Barbara Niemand.  It was a discovery for me that that particular branch of my family tree didn't branch as much as I would have liked.  I had earlier figured out that Frankie ran off with her sister's husband.  The story that I had heard was that she had come from West Virginia to help her sister out with her children.  There was the story about the Moffat.  First of all, did he really exist?  Did she marry him in West Virginia or was it in Iowa?  A few weeks ago, I discovered the answer to both of those questions.

Within the past year, Ancestry has added birth and marriage records for Iowa.  Other than census records and some burial records - Iowa had been pretty difficult to research from a distance.  I had gotten some mistaken information in my data file and I was trying to fix the mistakes.  I had Frankie's father as William Delatus Pitsenbarger.  There was a lot of similar information but I had figured out that they were two completely different people.  The Delatus name didn't fit.  So, in the process, I was trying to removed the incorrect information and found a marriage record that listed William Pitsenbarger in Iowa for his daughter, Rebecca Jane Pitsenbarger with a husband listed as William Henry Moffat.

They married on 21 Apr 1889 in Woodbury, Iowa.  So, now I have a different mystery.  What happened to William Henry Moffat...did he die..did he abandon Frankie or did she abandon him?  Sometime between April 1889 and early 1891, Rebecca Jane "Frankie" left with her brother in law for the Tacoma, WA leaving her sister behind with four children and a 5th child on the way.  It turned out the Frankie was also pregnant and she and her sister actually delivered their children one day apart.  I can't seem to be sure that I have been able to find any more info about William Henry Moffat...there are a few records in Canada that could be the same person.  Right now it is impossible to tell...so I have a new mystery to look at.

If you are interested in the whole story about George Christian Shawver and his family check out these three blogs.

and here is a bit more info on Frankie - My Pitsenbarger Ancestor.

All of this proves something...it is a good idea to go back and see what information might be new. You never know what you will find out when you revisit the information on one of your ancestors
Posted by CarmenMJ at 9:54 PM No comments: