When I first started researching the Gallup family, I had a list of names that belonged to my great great grandmother's siblings.  However, I never had faces to put to the names.  A cousin gave me a copy of this photo several years ago, and since then I have seen many photos of these family members. 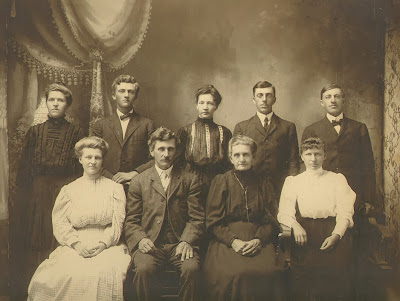 I believe that this photo was taken around 1915 or so and most certainly taken in or near Lyons, Burt Co., NE.  Here are the cast of characters...

Not pictured are Helen Gallup m. Joseph Brown - see below (Helen is at the top with daughter Helen Brown Noonan and her two children)  Phoebe Montanye Gallup on the right.


﻿
I don't have a photo of Allen Gallup who lived in New York, but below is  photo of my great great grandmother and her children. I would estimate that both photographs were taken around 1896.  The two children are the twins, Peter Z. Gage and Phebe Margaret Gage - the small boy is my great grandfather Ora Silas Gage and the baby is Alice Irene Gage and also Orlando Gage is in the top picture. 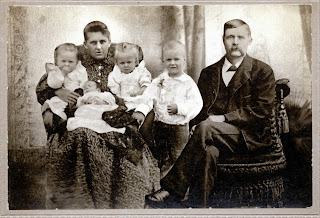 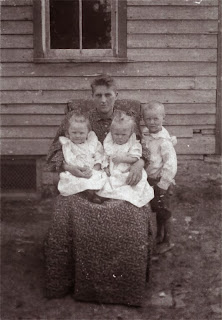 This Gallup lineage is as follows:

John Gallop and Christobel Bruschett are my 10th great grandparents and were the immigrants to the New World...

The pictures above are the best photos that I have of my great great grandmother's family.  They have a long history in this country arriving in Boston in 1630 then moving to Connecticut and later New York and finally immigrating to Nebraska in the 1880's.