I was making some cookies at Halloween and wanted to make the frosting orange.  I have several types of food coloring in the cupboard, but I found an old combination box of food coloring that I thought must be pretty old.  I forgot about it and finished my cookies.  Just about a week ago, I was at the store and saw the combination box of food coloring on sale and decided that I should get a new box.  When I got home and put away my groceries, I decided that I needed to get rid of that old box...and I was curious as to how old that box really was.  I looked all around for a date and found a date of 1975.  The more I thought about it...the more I started to remember what we used that food coloring for.

When I was a little girl, my Mom taught music lessons for piano and voice from about one o'clock in the afternoon to as late as seven o'clock in the evening.  Most of the time, she would have a casserole ready or something in the crock pot so we had dinner ready, when she came upstairs.  Mom did that so we would be able to be in swim team, boy scouts, girl scouts, camp fire girls or anything else we were involved in.  Mom also did that, so she could spoil us at Christmas.

Mom made Christmas special at our house.  I can still remember the tree dripping with tinsel that we had gone out in the woods to get.  It was never perfectly shaped and it seems that Dad was called on to drill holes in to insert branches.  Nothing was perfect...because she let us help with the decorating. Mom also did a lot of different candy and cookies.  I still do that, but I have never been able to make divinity successfully.  One of the things that I can remember is making popcorn balls at Christmas.

This was a relatively cheap gift but it was a lot of fun to make.  Mom would do the popcorn and the candy to make the popcorn stick.  She would use that food coloring to make any color combination that you could think of with those four basic colors of red, green, blue, and yellow.  I can remember having a popcorn ball Christmas tree that we decorated.  I can also remember popcorn balls wrapped up in plastic wrap that we could give to our friends as gifts.  The process was kind of fun.  We would rub butter all over our hands, then take the hot gooey popcorn and form balls.  We would finish one batch and color, and start the process all over again.

I have so many memories of Christmas that are wonderful and I feel incredibly lucky to have had the wonderful childhood that my parents gave us.  I hadn't thought about those popcorn balls for years...I would have a hard time eating them these days.  I can't have all the sweets and popcorn isn't very nice to my teeth.  I almost wonder if I should keep that old box of food coloring for posterity.  It is a nice reminder of Christmas popcorn balls and the fun we had making them! 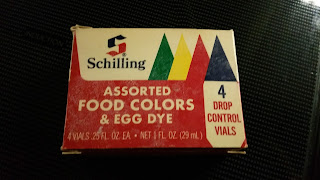 Email ThisBlogThis!Share to TwitterShare to FacebookShare to Pinterest
Labels: Christmas

Yesterday, I was watching the Fox broadcast for football from Pearl Harbor.  I had DVR'd it so I could watch it when I got home.  Even though many of the games had already been played, I wanted to see what they had highlighted from Pearl Harbor.  They listed all the names of those who had died that horrible day on 7 Dec 1941.  I looked for Elmer Hicks...because he was a classmate of my grandmother and great uncle from the 1939 class of Potlatch, ID.  After that, I kept glancing down at the names and to my surprise, a Pennington showed up...something I hadn't known.

Raymond Pennington was born on 3 Apr 1924 to Harry Spears Pennington and Frances M in Colorado.  By 1930, he is recorded with his parents in Los Angeles, CA and in 1940 he is in Inglewood, CA and it is just Raymond and his father Harry...his mother had died in the intervening years. Raymond is listed in the 1942 Inglewood High School yearbook as having died on Pearl Harbor day and is listed as a Marine private.  He was originally buried at Oahu Nuuanu Cemetery in the Hawaiian Islands and his remains were moved and interred at Golden Gate National Cemetery on 21 May 1948.  (Find A Grave #3619767) This was according to the forms from the US National Cemetery Internment Control Forms.

I was able to establish that Raymond was the son of Harry Spears Pennington and Harry was the son of William T Pennington and Martha "Mattie" Crockett.  Harry was born 4 Dec 1890 in IL and died on 5 Sep 1943 and is buried in the same cemetery and listed as a Chief Radioman US Navy (Find a Grave # 3619765) I find it ironic that he died just a few years after his only child died in the same war.

I did a quick search to try and figure out which group this Pennington came from...it was a quick search.  This is the line I was able to find:

I believe that this is Group 1...but it certainly deserves a lot more research!
Posted by CarmenMJ at 11:26 AM No comments: