My Pennington line comes through Elizabeth Pennington, daughter of Levi Pennington and Elizabeth Henson.  She married Alexander Monroe Dollar on 17 Jan 1857 and they had four children:


Amanda Jane Dollar married William Davis Lyall on 3 Aug 1881 in Ashe Co., NC and had 10 children.  I know that my grandmother corresponded by letter with at least one of her Lyall cousins – Ennis.  I’ve read references to her in my grandmother’s diary’s.  Amanda never left Ashe Co., NC for Laurel Bloomery, Johnson Co., TN – she was recorded with her uncle (Larkin Pennington) in the 1880 census and is married by 1881. She is buried with her husband at the William M. Lyall Family Cemetery, Ashe Co., NC.

John Dula Dollar is my great great grandfather.  My great grandmother probably didn’t know her father terribly well.  When she was a baby, her mother died a few months after her birth, and her father left his three oldest children with his father and step mother while he worked.  A few years later, he married Cleopatra Gentry and took the two oldest children to live with him, leaving my great grandmother to live with her grandparents.    John had three children with his first wife, Buena Vista Bailey and seven children with his second wife.  I know that during his lifetime, he worked in a lumber mill with his father and brother, probably worked as a miner in Colorado (he is recorded there in 1920 with his family) and was also known as a shoemaker, carpenter, and store operator.  I suppose he did just about anything to support his large family.

Emeline Caroline married a man, Caleb Wills Noland who lived nearby on 27 Oct 1881 in Johnson Co., TN when she was 15 years old.  She and her husband had nine known children and to this day, I know very little about some of her children.  She was the longest lived of the Dollar siblings living to almost 89 years old.  During her lifetime, she can be found in Tennessee, McDowell Co., WV, Wise Co., VA and she dies in Letcher Co., KY.  It is no wonder that her family has been hard to piece together.

The youngest of the Dollar siblings is Roby Smith Dollar.  Roby also married a local neighbor woman named Sarah Margaret Simmons.  The Dollars and Simmons family can be found close together in the census records.  Only Roby stayed in the Johnson Co., TN area for the remainder of his life.  Roby primarily worked as a lumberman and carpenter.  There are parts of the Wesley Methodist Church in Shingletown that he built and are still in evidence today.  He and his wife Sarah aka Maggie had 10 daughters.  All lived to be old women.  He used say that he would never be poor because he had his “10 Dollars!”  On 19 Feb 1912, Maggie died of pneumonia leaving Roby with his 10 daughters and the youngest was only 6 months old.  Life took most of Roby’s daughters away through marriage, work and different opportunities.   His daughter Eva lived with him for a time because she herself was disabled and had a difficult time with sight.  She is buried next to him at the Mountain View Cemetery in Mountain City, TN.  One of his daughters came back home with her husband and stayed to take care of her father and she lived to be almost 100 years old. 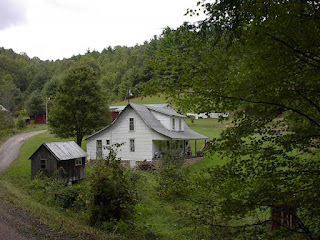 I have often wondered if Elizabeth Pennington was sickly during her life.  It is odd in that era to have only four children and spaced so far apart in age.   I know that she moved with her husband over to Laurel Bloomery but probably died within a few years after the move.  She was probably around my age of 45 when she died.  The path my Dollars took over to Laurel Bloomery was because of the Pennington family.  Elizabeth Pennington’s uncle, Andrew Pennington, lived over in Laurel Bloomery…specifically in Shingletown.  At the time, Alexander Monroe Dollar, found a better way to support his family by working as a lumberman – so they moved over the mountain to Tennessee.   The Dollars and Penningtons came from Ashe Co., NC – but my particular branch through my great grandmother came out of little house in a holler in LaurelBloomery.
Posted by CarmenMJ at 7:00 AM