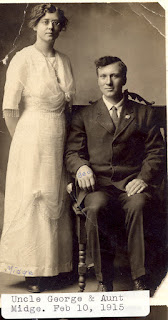 One of my grandmother’s favorite memories was the visit to her Uncle George’s in 1934 as they were traveling to Idaho.  My great grandparents had sent their furniture on a train to Idaho and they were driving their Model T from Philip, SD to Dover, ID. This was a trip that was accomplished in 1934 without paved roads (or interstates) and in a vehicle that had few of the modern conveniences that we enjoy today.  Not only that, they had seven children in the vehicle as well.  So, in November 1934, my great grandparents made a stop at the George Shawver ranch.  The nearest town of any size was Jordan…and it is 40 miles away.

I recently had the opportunity to visit Jordan, MT and the George Shawver ranch (part of a family reunion).  This visit has convinced me that I am glad that my great grandparents went on to Idaho.  Not that it isn’t beautiful country – but it is very different than what I am used to.  We had a wonderful time visiting and meeting various family members.  This reunion was organized to mark the 100th anniversary of the George and Clara “Midge” Shawver homestead.  One of the activities was to visit the original home place. So, as we traveled the road to ranch, I tried to picture what it must have been like to travel there in 1934 in November near Thanksgiving.  There was a concern that we wouldn’t be able to make the trip because they had a rainfall that morning.  This made me wonder if we were having that problem in the middle of the summer, what occurred in November? 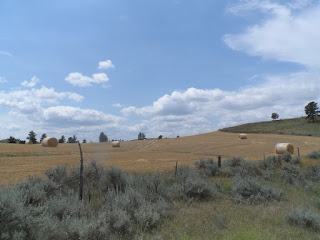 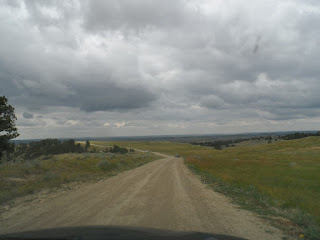 They took us to the local post office that served the area.  It was an old cabin that wasn’t in top condition.  We found that the name of the post office was “Uebra!”  It turns out that whomever made the application for the post office had handwriting that was difficult to read…and instead of “Nebra” (for Nebraska) it came out as “Uebra!”  This little post office served about 10 families and the mail came in once a week.  Each family would travel to the post office once a week to get their mail…and in the case of the Shawver family it was about 10 miles on a horse…and for a number of years the postmistress was Clara Bacon Shawver aka “Aunt Midge” and later her daughter in law, Marguerite. 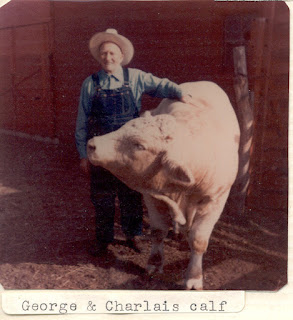 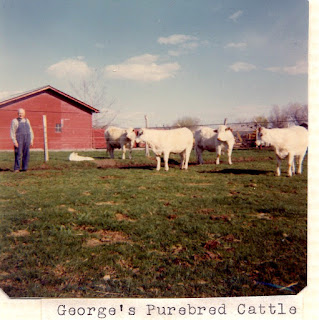 After we had stopped to learn the story of the post office, we moved on to the ranch.  The landscape reminded me of the badlands – lots of sandstone that had been shaped by the wind and rain.  I can understand why there are a lot of fossils found in the region.  We also saw a lot of areas that had hay bales scattered throughout. I asked the question later of how many cuttings of hay they got in a year (near Jordan).  We (Lewiston ID) generally get two and in some areas three cuttings – I was told that they got one cutting.  In land area, the ranch was very large.  I was told that they had 13 – 640 acre plots which equals 8,320 acres.   I know that this was a cattle ranch and I have pictures from my great grandmother of her brother, George, and his Charolais cattle, which I have been told were prize winning cattle.  When George & Midge first moved to the ranch, we were told that they lived in a dugout on the ridge for a few years.  I can understand that it was probably the easiest and most accessible form of shelter, but I certainly have a hard time imagining living in such a place.  They had also built a ranch house after a few years and that has been torn down to make way for a manufactured home.

The comment was made several times “I am glad the grandfolks came to Idaho,” however, I am sure many of my Montana Shawver cousins feel differently.  It is a beautiful landscape and being that remote would be ideal for many people.  It reminds me how different our lives are as Americans.  You have people who live in bustling cities and couldn’t imagine living somewhere so far from civilization and others who live in remote areas and couldn’t imagine living so close to so many people.


I remember meeting Uncle George when I was a little girl.  He had come out to Idaho for a celebration of my great grandparent’s 60th wedding anniversary.  My great grandmother was one of 17 children and she was especially close with the 10 siblings that she grew up with.    I think at that point, only one of them had passed.  I think that it is rather remarkable how many times our families from near and far have gathered for a family reunion.  In our case, we drove the distance to Jordan, MT for the 100th Anniversary of the homestead for George & Midge Shawver.  It was a little different for me…there were many new faces and I only had an inkling of who many of the cousins were. I am used to knowing nearly everyone at family reunions.  I think that we figured out that we had members from Jessie Shawver Gallup Bacon’s family, Dewey Shawver, Florence Shawver Gage (my line), Harold Shawver and of course many members of George & Midge Shawver’s family.

My grandmother would have enjoyed this family gathering so much.  It wasn’t hard for me to imagine her sitting there visiting her dear cousin Mary in person instead of email or the phone.  Mary was there for some brief periods and along with her sister, Clara. They are the last surviving children of George Shawver and Clara Bacon.  (Mary has just recently passed away.)  I couldn’t help think of that long ago trip that my great grandparents had made.  It was memorable time where the older children had the chance to go and play…whether it was horseback riding or a few local dances with some of the locals providing the music.


There were probably at least four generations of Shawver family members at that reunion in Jordan, MT.  I missed out on the group picture – had run back to town to get my computer.  (This time it wasn’t on purpose on my part )  There were members who were in their 80’s and even 90’s and young babies and even a pregnant momma.  As someone who spends a great deal of time studying family history, it is a visual tableau of what a family is.  For that special few days – it was a time to share stories and perhaps a few tall tales as well as pictures and a potluck to share a few special recipes.  It was everything that family reunion should be.