The Brother I Never Wanted

I have had an argument with my cousin, Kenny for about 30 years.  He made a beautiful dollhouse for his daughter.  It was constructed piece by piece by Kenny’s patient hands.  It was an incredibly detailed Victorian themed house with a beautiful turret in the corner.  According to Kenny – that was a tower because a turret was something that came out of tank.  I told Kenny that it was called a turret when it was cone shaped feature  on a Victorian house.  Kenny told me to “Go lay down by my dish!”  Only Kenny could get away with saying something so insulting and making it sound almost like an endearment.

I am sure that I was a "pain in the ass" younger cousin.  I can remember going up to my Aunt Anne and Uncle Bill's place and being stuck inside while my Aunt played with an actual female child.  I really can't blame her - she was likely in testosterone "hell!"  The only thing female oriented in the that house other than Anne was the doll on her bed that she had hoped to give to a daughter.  Anne tried 5 times (maybe not on purpose), and ended up with five boys in 6 years.  There were wonderful memories of sledding down the hillside by their home in Potlatch, ID. 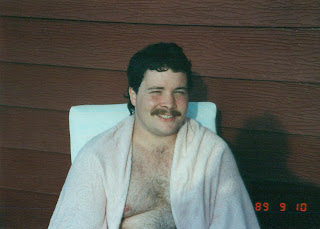 Kenny was my parent's godson.  His mischievous nature, twinkling eyes, charming personality and humor especially endeared him to my mother.  He held a special spot in my Mom's heart.  In the late 1980's, Kenny worked a few summers doing yard work for my folks.  It was at that time that Kenny and I learned a few things about each other.  Kenny told me that he always felt a little sorry for me because he thought I was picked on.  I thought of him as yet another male cousin.  Kenny then informed me that after watching me in action, he was pretty sure I wasn't picked on and that I gave as good as I got.  He then decided that I was the sister he never wanted.  I was more than happy to provide Kenny with some feedback on some of his idiotic male notions.  It was good-natured on both sides and always remained so.  A few years later, Kenny decided that he was going to go to college.  By that point, I was a Senior at the University of Idaho and Kenny was an incoming Freshman.  You might say it was a reversal of circumstances...I was the Senior at the University of Idaho and he was the incoming Freshman.  Kenny was going through registration and he was still there when I showed up 2 hours later.  My registration process took 10 minutes...as a Freshman, his was much more complicated.  I helped him through and we left several minutes later.  Kenny showed up to my apartment many times during the following months.  He might have been helping me with something, or I was helping him.  I cooked more than a few meals for him and he did several jobs fixing one thing or another.  I conned him into going to see "Les Miserables" with me.  Broadway musicals really weren't his thing...he was was much more fond of 70's rock.


It seemed that almost every time we saw each other at family reunions or gatherings during the next few decades we renewed our argument about the turret or tower.  There was also a lot of hugs, joking and conversation.  There were also more than a few phone calls that lasted over an hour.  Both of us reminiscing about the past and talking about our families.  We had that cousinly bond…but it was much more.  I always got off the phone reminded at how deeply Kenny loved his wife, his children and grandchildren.  The bond with his brothers was always there as well as that with his nieces and nephews.

When my mother died, one of the first phone calls I got was from Kenny.  I can’t remember exactly…but I think he couldn’t make it to the service.  It just about broke his heart because he adored my Mom – and it was definitely reciprocated.  I remember seeing Kenny during the next several years and he was almost always taking care of someone.  Sometimes it was his Dad or Mom or our Grandmother.  Despite Kenny being such a jokester, he had a caring heart and he used humor to offset tension.  There is no question that at times, it was inappropriate…but there was an expression used in our family – “it was just Kenny!”  When Kenny’s Dad died, he asked me to read something for he and his brothers.  He knew that he was asking me to do something that would be hard for me to do – but he asked me because he trusted me to do it the way he wanted.

Kenny passed away on Sunday, January 6.  When I heard the news from his mother, I had to sit there for a while with tears rolling down my face.  I was never going to get that big bear hug again or hear his teasing.  Kenny left a wonderful legacy!  There is not one person who will ever forget him who knew him.  His brothers will always tell stories about the trouble they got into…his nieces and nephews will always have a story about something stupid that Kenny taught them to do.  Kenny leaves behind a loving wife and adoring children and grandchildren, a mother and brothers and their families who will do their best to continue to keep Kenny present.  There is also is his extended family.  We have been blessed with a large family, but it is so hard to lose someone who was so beloved.  For as long as anyone is alive who knew Kenny – there will be a funny story and knowing Kenny that is exactly what he would have wanted.