The Gallup family has several names that seem to intersect quite often within the Gallup lines.  As I have mentioned many times, I tend to look at the siblings of some of my ancestors.  Ebenezer Gallup is my 4th great grandfather and was the son of Silas Gallup and Sarah Gallup.  I was perusing the siblings of Ebenezer Gallup and was caught by the name of Joseph Crary who married Margaret Gallup.  This is one of those names that seem to show up often.

Joseph married Margaret Gallup in 1809, a woman who was five years his senior. (Margaret was b. 21 July 1776 and d. 5 Aug 1851) From what I understand, this was a first marriage for Margaret Gallup, and she was 33 years of age.  Crary is an early Gallup surname.  Christobel Gallup (daughter of John Gallup and Hannah Anna Lake) and married Peter Crary and were Joseph Crary’s great grandparents.  Joseph’s parents were Isaac Crary and Mary Gallup.  Mary isn’t really that close of a cousin to Margaret Gallup, even though they share the last name something like 2nd cousin, three times removed.  My genealogy program calculates that Margaret Gallup and Joseph Crary are 3rd cousins.  I am not sure many of the family lines would do well under too close of inspection as it was a small geographic area and too many families intermarrying.

There are a few things that seem intriguing to me.  Joseph Crary is five years younger and marries Margaret Gallup as his second wife.  It is her first marriage and she is 33 years old.  Joseph and Margaret manage to have four children together with the last one born when she was 43 years old.
Their children are:

You might have noticed that Alanson Crary and Lucy Crary both married Whipples…yes they married siblings, both the children of Israel Whipple and Mercy Carpenter.  Joseph Crary was not the only one who married a Gallup.  His brother, Nathan married a Hannah Gallup (daughter of John Gallup and Hannah Denison) and Sarah married Eli Gallup, the younger brother of Margaret Gallup.
If I go back a few more generations, I am sure that I would find more connections.  Not only did they come from Connecticut but seemed to travel to New York in the same time periods so the family ties continue for a few more generations.

Posted by CarmenMJ at 8:59 PM No comments:

Yesterday (Oct 1, 2016), we dedicated Shearer park which has been in process for about eight years. Our family donated the land in Elk City a number of years ago and it has finally come to fruition. The potential for the park as a trail head with an ATV trail going all the way to Avery, ID is a pretty cool possibility.  For those outside of the area, this area of Idaho is definitely a wild area with a truly beautiful landscape.  This will not be a trip for the faint of heart.  I can't tell you how much this means to our family and we really have a lot of thanks for a bunch of people for making this happen.  Especially the "Framing our Community" of Elk City and the Dust Devils ATV club of Elk City.  We worked specifically with Joyce Dearstyne of "Framing our Community" and Mike and Arlene Evett of the Dust Devils ATV club. I am posting a few pictures of the occasion and the speech that I made. 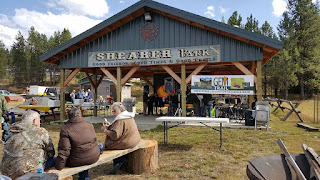 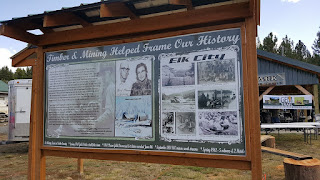 This has always been a special place for my family.  From summers fishing, camping and swimming at Red River to winters where we enjoyed using sleds and the toboggan coming down that hill.  It would be pretty difficult to do that now as my brothers planted a few too many trees in their boy scout project over 40 years ago.

When my grandparents, Gwen and Cappy, sold the mill in 1978 and moved back to the LC Valley…they left a part of themselves here.  They worked for 20 years to build Shearer Lumber products.  They also spent those 20 years working on trying to improve the community that they adopted as their home.  If you knew Gwen and Cappy – they had no pretensions.  If you worked for Gwen Shearer at the mill, he expected you to work hard and give the best effort that you were capable of…he also expected the same of himself.  I would bet that there weren’t many jobs that he wasn’t capable of doing himself.  Grandma Cappy worked for many years as a teacher.  I suspect that if you were a student of hers – you would call her strict but a patient teacher.  That was the Grandma I knew…she didn’t tolerate a lot of nonsense but if you were curious to learn she had the most wonderful patience as you asked her question after question.  Education was an important part of my grandparents lives.  Grandpa Gwen was a member of the school board.  Grandma Cappy taught school and wrote a column for the Idaho Co., Free press for a number of years.

When my grandmother graduated from high school in 1930 – she went to school at the Lewis Clark Normal.  Her parents had to butcher a hog to pay for tuition and she rode a horse to school.  Grandpa Gwen never had the opportunity to go any further in school.  Despite being his Senior Class President and one of the top students – there was no money.  It was a struggle to just have food on the table.  These experiences left an impression on them. In 1981, my grandparents set up a scholarship where one student from each of the high schools in Idaho county could earn a scholarship to the University of Idaho.  Over 100 students have received that scholarship to date.  In 1986, my grandfather was able to attend a University of Idaho graduation to see not only my brother, Russell, graduate but also those first scholarship students.  Our family is very proud of the Gwen and Capitola Shearer scholarship and the opportunities that it has given to those who have earned the scholarship and have gone onto productive lives.

It has been about 30 years since we lost the Grandparents.  There have been a lot of changes during that time.  I can tell you that my grandparents would have heartily approved of the improvement of the recreational opportunities that the trail head will produce.  I am sorry that neither one of them ever got to enjoy the sheer fun of riding a ATV.  I can remember riding with my grandmother to the post office to get the mail in the winter time on the snow-cat…If she were here today, she would have certainly enjoyed the taking an ATV.  Grandpa Gwen would have definitely enjoyed the utility at the mill…but also during his hunting and fishing trips.  My grandparents loved this area and deeply cared about what happened here.  I know they would be pleased to see this park.

I believe that there are two memorials to my grandparents now.  The scholarship is one that they created – and this park is one that the community they so loved created.
Posted by CarmenMJ at 1:34 PM No comments: