I enjoy watching programs like “Who Do You Think You Are” and Henry Louis Gates series “Finding Your Roots!”  I was bitten by the genealogy bug many years ago….probably even when I was a child because I loved listening to the stories of my grandparents and various other relatives.  The guests find that their family mysteries are seemingly solved with a short TV episode, although I must say they are missing out on all of the fun.


Genealogy is a journey!  There are a lot of interesting stops along the way, but always something new on the horizon.  There are even walls that may take years to tear down if ever.  Every few years there seems to be some new tools to add to the treasure chest.  Like those programs, I am picking and choosing some “interesting ancestors.”  My great great grandfather who had 17 children.  He was married to one sister, ran off with another sister and after she died, married a “widow” who turned out to be a divorcee.  In the early 1900’s, this was somewhat of a scandal.  Here are the blogs I wrote about George Christian Shawver:


My 10th great grandfather has all of the credentials of a hero and significant figure in history.  He was the first man to navigate Boston harbor.  That probably doesn’t sound all that important to today’s generations but to someone in 1630 it was significant.  Ships could navigate in a safe passage in and out of Boston, which could arguably be called one of the most important cities in Colonial America.  He really was one of the more important people of his generation.


I have Mayflower ancestors that came on that first ship. Elizabeth Tilley was a teenager whose parents died during that first winter and she ended up marrying one the two bachelors who made the trip, namely John Howland.  There are a lot descendants who can claim ancestry to John Howland and Elizabeth Tilley.  (Mayflower Ancestry - Part 1)


Then there is John Billington.  He was considered to be the troublemaker of the group causing constant tension among the passengers.  His two boys nearly blew up the ship during the journey playing with flint around gun powder.  John Billington also turned out to be the first man hung for murder in the new world.  (Mayflower Ancestry - Part 2)


William White was one of the nearly ⅓ of the passengers who died that first winter.  There is a lot to be admired anyone who undertook the journey on the Mayflower.  These people didn’t know what they would face and took the hazardous trip to be able to practice their religious beliefs without the interference of a government.  William White’s wife, Susanna ended up marrying the first governor of the colony, Edward Winslow..who turns out to be my 9th great grandfather’s older brother.  (Mayflower Ancestry - Part 3)  Kenelm was quite an interesting fellow as well…(Coffin Make in New England)


My father’s great grandfather (Washington Abraham Johnson) was a 1st cousin to Pres. Andrew Johnson which is interesting enough.  However, his younger brother Nicholas Johnson was interesting in his own way.  If you talk to his family members, Nicholas disappeared after the Civil War and ran off to California abandoning his wife and children as well as aged father.  I am not sure I will ever find what happened  to him. (Nicholas Johnson - Man of Mystery)


There are a lot more characters in my ancestry.  I had ancestors who were among the first settlers here and as far as I can find, I don’t have an ancestor who arrived any later than 1810.  I have been very lucky, I have known 3 great grandmothers, 2 grandmothers, 2 grandfathers, and a great grandfather.  Every one of these people have made me who I am.  I am not like most of those celebrities in those TV shows because I do know a lot about my history.  When I began doing research more formally, I did it with my mother. Mom was my best resource for stories about her family and many years ago she took the initiative on long ago conversation with her father in law to give us a great starting point on his family. We lost Mom back in 2005 - I know she is breaking down all those brick walls...sure wish she could tell me what she has learned. This is my favorite picture of my Mom...in her signature red, her favorite color. 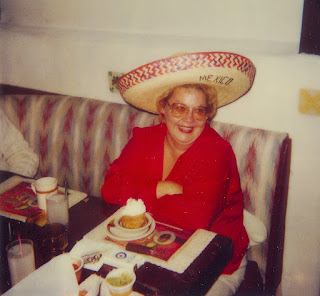