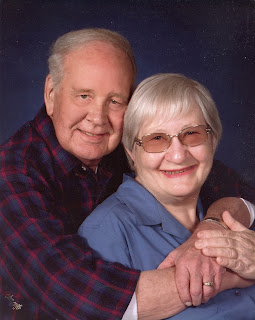 It was just about a month ago I was thinking that I needed to have my uncle over for dinner.  My plan was to wait until it cooled off as we were in the middle of a heat wave.  Uncle Karl was very fond of my meatloaf and that seems like a meal for fall rather than the hot summer.  However, it looks like it was not to be as he passed away on Aug 14, 2017.  Life had been harder for Karl the past few years.  For 56 years of his life, he was half of a pair, and when his wife Shirley passed away 2 years ago on July 1, 2015, it seemed that the light when out of his life.

Karl grew up in Moscow, ID.  I don’t suppose life was all that different than any other kid who lives in a rural area.  His Dad worked at the University of Idaho in the farm area and Karl and his siblings played around the various farm animals.  His sister, Paula, relates how they ran around as kids wearing only cotton overalls, cowboy hats with cap guns in their holsters.  Playing around as if they were members of the Jesse James gang.  They moved to another house that had a creek running through it.  The kids enjoyed playing baseball in the cow pasture.  As Paula relates it, they used cow pies as bases so when the game was done at the end of the day, big brother Karl would strip them down and hose them off before they were allowed to go into the house.

I can honestly say that those stories don’t surprise me but they were nothing like the Karl I knew.  That is mostly because I didn’t really get to know Karl until I was an adult.  I didn’t have time for adults when my cousins were around to play with.  In fact, it is sometimes difficult to see an older member of the family has a child or a young man.  I can remember Karl relating a story of he, my Dad, and uncle Bill taking a trip down to Mackay Bar (remote area along Salmon River, Idaho) Evidently it was quite a narrow and treacherous road – if you asked my Dad, he would tell you it was a good road.  Anyway, the three guys, all in the 20’s, were three abreast in Dad’s car and one of them was holding a bag of potato chips.  My Dad (Gene) was driving and kept reaching across to grab some chips.  Karl had the opinion that Dad should keep his hands on the wheel!  It was funny listening to Karl, Bill and Dad squabble about the relative safety of that road trip 50 years after it had happened.  Parts of the story never changed – Karl’s opinion that Dad needed to keep his hands on the wheel and the problem they found at the bottom of the road.  Somehow, they were out of gas and the only gas available was some old airplane gas at the bottom of the hill.

Karl married Shirley on January 24, 1959 and he became a part of the Johnson/Gage clan, whether he wanted to or not.  My Dad was always closer with his two older sisters and they were geographically closer together than his other two siblings.   It was Gene and Betty (my folks), Karl & Shirley and Bill & Anne.There were a lot of shared memories with my Dad (Shirley’s older brother) and Uncle Bill (married to Shirley’s younger sister, Anne).  Karl, Dad & Bill essentially became brothers.  So, the three couples joined together for a lot of dinners and visits. They hadn’t had much time after they had been married a while.  Between 1958 and 1967 there were 13 kids born between the three families. However, when the kids were all out of the house, the three couples had many dinners together.

Karl was always willing to lend a hand and when you thanked him, he would reply “This is what you do for family!”  There were a lot of occasions when Karl & Shirley showed up to help out with one project or another.  I especially saw this the last 20 years or so.  The Karl I knew had a gentle smile.  He was a bit on the crochety side occasionally, but that was something Shirley could usually charm out of him.  Karl and Shirley spent a lot of years as camp hosts up on the Lochsa.  It appealed to both of them – Shirley enjoyed the social side of it and Karl enjoyed the camping and spending time wandering around the land.  The two of them went on many adventures on the 6x6.  Those wonderful adventures ended much too soon as Shirley passed away rather quickly two years ago.  It was though the light went out of his eyes, and I wondered how long we would have Karl.  Life wasn’t much fun without his life partner.  However, Karl made an effort – mostly because he knew Shirley would want him to.  I remember when I had some medical issues last year, I picked up the phone and Karl was on the other end.  I assumed he was calling for Dad, but he stopped me and asked me how I was feeling.  Then he told me to let him know if there was any way he could help.  I suppose in the end that is the way I will think about Uncle Karl…offering his help if he was needed!
Posted by CarmenMJ at 12:40 PM