When I was growing up, I would often hear my grandmother talk about her father's aunts and uncles that she remembered from Nebraska.  One of the ones that she talked about often was one she referred to as Uncle Henry. 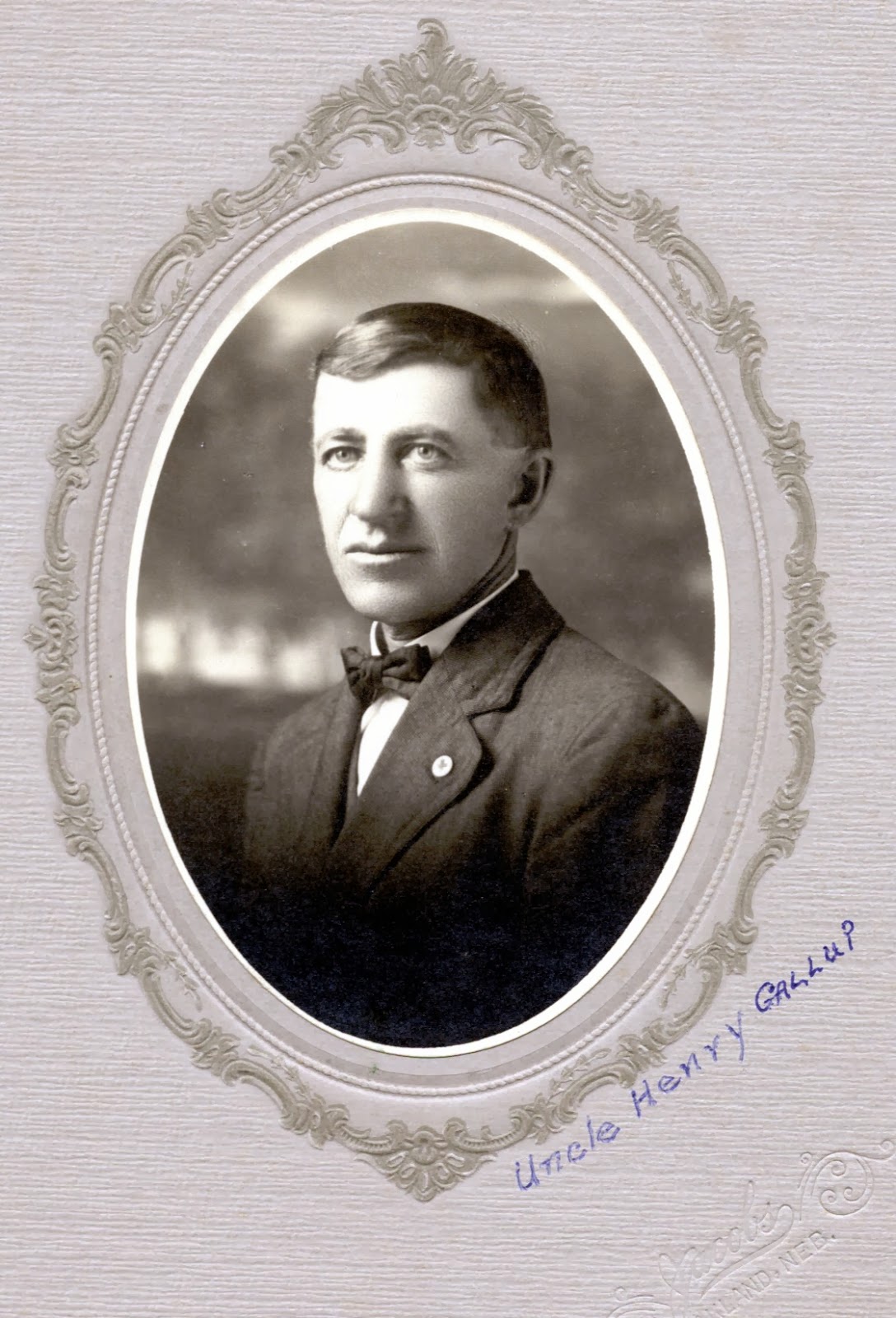 Everett Henry Gallup was 7th child in a family of 12 children.  He was born in Duanesburg, Schenectady Co., NY on 16 Jun 1873 to Silas Gallup and Phebe Ann Montanye.  He moved with his family on Thanksgiving Day in  1887 to Burt Co., NE.  Henry had two older brothers, Albert and Allen.  Albert was a school teacher and probably came out before his parents as did his other brother, Allen.  There were opportunities for young men that weren't available in New York.  However, Allen  went back to New York and married in 1898 and lived there his lifetime.  From what I understand, Silas Gallup had some health problems and had been encouraged by his brother and sons to come out to Nebraska because it was a dryer climate.  I don't know if this meant that he had tuberculosis or simply weak lungs - but I suspect that his health was not good.  So after moving out west in 1887, and starting a farm, his sons Henry and George probably did the bulk of the work.  By the time Silas Gallup died in 1898 of throat cancer, his sons aged 25 and 23 were already taking care of the farm.

George and Henry are listed in the 1900 census as partners and as farmers, but in 1907, George married Clara Thompson and moved to his own place.  Henry was left at the home place taking of his mother and he never married.  In 1908, his oldest sister (my great great grandmother) died and her four children came out west.  The oldest, my great grandfather, went his own way after bringing his siblings out on the train.  The younger three moved in and made the Gallup home place their home.  I don't think that circumstance lasted too long.  I have heard that the son, Peter, felt as though he was treated as a hired hand and if he was going to be treated that way, then he might as well be paid for it.  The youngest, Alice also was living with another family as a servant.  So in the 1910 census, only Everett Henry, his mother Phoebe and his niece Phoebe are in the household.  I have heard enough from relatives, that Phebe Montanye Gallup was not the easiest person to live with and many in the family felt that her granddaughter, Phebe Gage, was a remarkable person for staying to take care of her grandmother.  I have to wonder if the same might been said about Henry or (Everett Henry) which was his full name.  Henry Gallup never married and was the only one of his siblings to do so.   Phebe Montanye Gallup died on 21 Jun 1927 in Oakland, Burt Co., NE and left at the Gallup home place was Henry and his niece, Phoebe...and old bachelor and his old maid niece.

They lived together and continued on as before with Henry working the farm and Phebe taking care of the home and all of the other things that women did during that time.  All that changed on 16 May, 1932, when Henry died in a tractor accident at the age of 58.  He wasn't the youngest of his sibling to die - two sisters had predeceased him, but he was the first of the Gallup brothers to die.  The farm was sold as well as all of the contents and while Phebe was supposed to not inherit anything by her grandmother's will, Henry's siblings made sure that she did - because along with her uncle - they had taken care of Phebe Gallup and the family farm for decades.  Unlike her uncle, Phebe did not remain unmarried and married a widower, August Peterson when she was 43 years of age.  In fact, I dimly remember meeting her before she died in 1976 at the age of 81.