It was January 12th, 1949 - I’m sure it was a normal Wednesday.  Mom woke up, had breakfast with her sister and got ready to go to school.  I know that my grandmother probably made her wear her woolen stockings, which she hated – and she walked to school with her sister.  It was a cold day – according to the historical record the day before was -8 degrees F and the average daily temperature for the month was 7 degrees.  I’m sure there was a special dinner that night because it was her sister’s 10th birthday.  Because it was my aunt’s birthday, she was staying the night with her grandparents (Mom & Pop Friddle) who only lived about a hundred feet away.  Mom probably went to bed at an early hour and was sound asleep, when she was suddenly awakened – and her world changed.

I’m not really sure when my grandparents became aware that their house was on fire – but I know my grandmother’s first thought was to get her daughter to safety.  So, she woke up my mother and hurried her down the stairs and away from the house.  Mom was told to go down to her grandparents’ house.   There was a lot of snow that year, so there was a path that led to Mom & Pop Friddle’s house that made Mom think that she was going through a snow tunnel.  She looked behind and just above the top of the snow, she saw flames leaping out of the roof near the chimney.   Mom hurried down to the Mom and Pop Friddle's house and and I’m sure she and her sister along with their grandparents watched while their house burned down.

Mom’s house was on 125 Thain Road, located just at the top of Thain Grade in the Lewiston Orchards.  Hastings, McDonalds, and Erb Hardware currently sit on the lots that used to be the homes of my grandparents and great grandparents.  Thain Road is a busy road…and so people driving by saw the situation and stopped to help.  Some well-meaning person was throwing out of the window, the new dishes that my grandmother had gotten for Christmas.  Four young men were struggling to move the upright piano out of the living room.  It appeared to be too heavy for them until the roof started collapsing from the fire, they got such a shot of adrenaline that they carried that piano out of the house and clear across the street.  It was one of the few items that were saved, plus a few pictures and mementos.  Mom’s father had died just 16 months before (Daddy’s Gone) and Grandma managed to save the leather jacket that he had as well as some pictures and some his personal mementos.  In reality, very little was saved and the home that my grandmother had built with her first husband was gone.

It was a significant fire for the Lewiston Orchards at the time.  There were no fire hydrants nearby with water to help battle the blaze and while I’m sure there was a volunteer fire department, they were ill – prepared to fight the fire and so all was lost.

When Mom woke up the next morning, she was in the unique situation that she couldn't go to school.  Her sister could – because they had saved her clothes – but the only clothes that my mother had were the play clothes that my grandmother had hung out on the line to dry.  It had to be hard for her though – she was eight years old and literally everything that she had was gone – her clothes, her toys and her books.  Her classmates all brought some money to school and the teacher went out and bought Mom two dresses and a Sambo doll.  Mom would wear one dress on one day and her mother would wash the other dress.  During that time period, girls were not allowed to wear anything but dresses to school.  I don’t know how many people remember what or who “Sambo” was…but Sambo was based on a children’s book about a little black boy and was a popular character from her childhood.  (Yes…I know it was politically incorrect.)  I remember going to the Sambo’s restaurant as a kid – primarily for waffles. 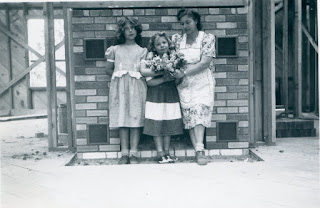 So for the next several months Mom and her family went through the process of rebuilding.  Mom and her sister stayed with their grandparents (Mom and Pop Friddle) and Grandma and her new husband (Gwen Shearer – they had married Sept 1948) lived in the shed behind the house while they rebuilt the house.  I’m sure it was many months before it was finished.  Just about everything we have that belonged to my grandmother comes from after that house fire.  We have a few chairs, an old 1948 sewing machine, and some dishes.  There are a few other items that they saved from the fire like that old piano, Grandpa Richard’s leather jacket and few other items.  It took many months before they were all living in the same house again. The first year after it was finished - the took a picture (see below) and put it on their Christmas card to send out to all of their family and friends - I'm sure they were happy to have a home again! 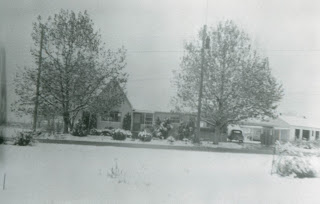