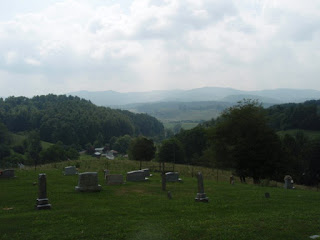 The first time I visited the Wesley Methodist Cemetery aka Shingletown Cemetery near Laurel Bloomery, Johnson Co., TN was in 2001.  It was a voyage of discovery that was made even more special by the fact that I was able to visit the home that my great grandmother grew up in.  (The Little House in the Hollar)  In 2003, I was able to go back…but this time I took a cousin with me to visit the house and we were able to visit the church as well.  We were also able to visit the daughter of the Ferd Reid who had directed me to the Dollar home in the first place.  Betty was taking care of her mother, who had dementia.  As we took some time to visit, Betty explained to me that she had grown up there in that house and her father had run a store that had burned down.  I remember as a child hearing my great grandmother talking about walking to town to go to the store.  I always wondered where exactly she was going because Mountain City was a long way away.  Betty told me several bits and pieces of information and asked me if I knew anything about her family.  I told that I didn’t really have any information…however, that has changed.


One of the most pivotal relatives that I have come across is Andrew Pennington b. 7 Sept 1813 in Ashe Co., NC and who died on 29 Dec 1894 in Shingletown, Johnson Co., TN.  You might wonder why I call him pivotal…In 1850, he and his family is recorded in the Ashe Co., NC census with an elderly man named Ephraim Pennington.  Within two years, he sells his land to an Elijah Pennington and moves to Johnson Co., TN.  That elderly man living with him was most likely his father and the Elijah Pennington who he sold his land too was his nephew.  That information makes him important in my ancestry because it turns out that Andrew Pennington was the younger brother of my ancestor, Levi Pennington b. 1794 and Ephraim was their father.  Not only that, when Andrew went over to Laurel Bloomery in Johnson Co., TN – within 20 years, Levi’s daughter and husband (my 3rd great grandparents) followed him over there – and that is where my great grandmother was born.
Betty had told me that her mother was the daughter of Bettie Pearl Blackburn who had come from Arkansas and her grandfather was William A. Davidson.  She didn’t really know all that much about him.  So, in 2005, when Hazel Davidson (Betty’s mother) passed away, I was able to read her obituary and get a little more information.  So, knowing that she was born in Johnson Co., TN near Shingletown, TN, I was able to establish from the census that her father, William A. Davidson was born in 1881.  William is recorded with his parents, Creed and Nancy Davidson.  At this point, my curiosity is somewhat appeased and I go on and do some other looking in the census records for my Pennington line.  I am starting to piece together the children of Andrew Pennington and his wife Mary Elizabeth Pope, imagine my surprise when I discover that they had a daughter named Nancy Laurinda Pennington who married a Creed Davidson.  I’ve been able to further establish the link by cemetery records for the Wesley Methodist Church Cemetery aka Shingletown Cemetery and her death record.

That one link led me to look even more closely at that cemetery and its inhabitants.  I have found that a large percentage are either directly descended from Andrew Pennington.  So with that information, I was able to learn even more about Andrew Pennington and his family.  Enough to know that in that little piece of Tennessee – there are a lot of Pennington relatives.  So by researching layer by layer on a family, I was able to gain a larger understanding of the family as a whole.  Andrew Pennington is quite distinct to me now and not to be confused with the Andrew Pennington who lived in Smyth Co., VA (A Tale of Two Andrews)  It just goes to show that it might be a good idea to explore some of these small cemeteries where some of our ancestors are buried.  You never know when you will discover another family layer to explore. 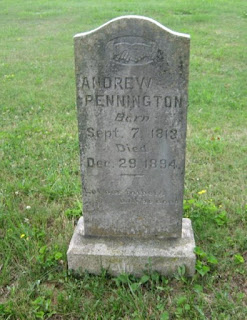 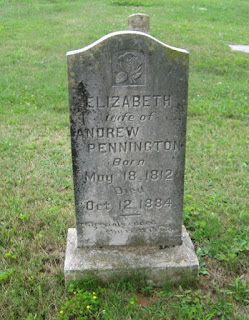 Children of ANDREW PENNINGTON and MARY POPE are: