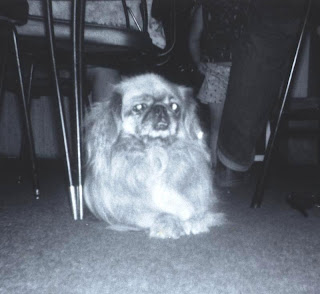 Whenever my siblings and I get together, one of the topics that often comes up is that of the family dog, Henry.  Even though it has been over 30 years since we lost him to the effects of old age…he is a part of all of our childhoods.

Mom went with her mother to pick out a puppy for her mother and they decided to get a puppy for her family as well.  Grandma was getting a Pomeranian who was a big ball of fluff that she called Cream Puff.  Mom chose Henry – a Pekingese that was much bigger than a handful.  When she brought him home, Mom and Dad had three kids all under the age of three.   Mom said that he was so tiny those first few weeks that she had to help him down the steps when he went outside to go to the bathroom.  My Dad named two of our pets in my lifetime…and Henry was one of them (Dad was never all that creative with names.)  However, I must admit that the name Henry suited our dog.

Henry took his role as guardian very seriously.  When a German shepherd was getting too close to my brother in the front yard, Henry took after the intruding dog.  You wouldn't think that a Pekingese could do that much, but there is a lot of strength in their stocky bodies and they have incredibly powerful jaws.  It took someone pulling Henry off to save the larger dog.  Whenever we were out playing, Henry would stay with us and watch over us.  When Mom would call, he would come running so Mom would know where we were at…once she was reassured, he would return to guard duty over us kids.

We lost Henry several times – probably through the carelessness of children.  Most times, it wasn't very long until we got him back…perhaps a few hours.  One Thanksgiving we were heading up to my grandparents and we had to stop in the eastern part of the Lewiston Orchards.  When we got back in the car and headed on, Henry got left behind.  We returned to get him…but he wasn't anywhere to be seen.  So, we continued on our journey to my grandparents for Thanksgiving.  When we returned home we spent a lot of time looking for Henry but never found him.  A few months or so later, Mom and Dad were driving along that same road, and they spied Henry sitting in the exact same place that he had been left before unintentionally.  He was well fed and looked healthy but when he saw my parents he was obviously happy to see his family.

I've always thought that Henry had a majestic look to him.  There was a pride and dignity about him that reflected his heritage.  Known as “Lion Dogs”, Pekingese dogs belonged to emperor of China and his court.  They didn't even show up outside of China until the 1860’s.  With his heavy coat of fir, Henry could often be found in the summertime outside sitting on a sprinkler to cool off.  It was always a funny sight.  However in the winter time, Henry was in his element.  His favorite activity was playing in the snow.  I remember the last year he was alive, he was playing in the fresh snow just like a puppy.

We lost Henry on Mother’s day, the year I was 13 years old.   During the previous few years, Henry’s muzzle had turned to white and during that last year; he seemed to have lost some of his patience with children.  The week before he died, he went around and visited each of the neighbors and one of them told us that it was like he was saying goodbye.  He was 16 years old and had lived a long and good life taking care of his family and watching over “his” kids.  There is no doubt that he remains a treasured memory of my and my sibling’s childhood.  Henry was a grand dog!
Posted by CarmenMJ at 8:40 AM