I didn't appreciate the significance of the history of Thanksgiving when I was young.  I knew the general stuff about the Pilgrims because we got to color pictures of them and talked about them in a general sense.  When I got older, teachers only seemed to want to spent a few minutes on the most general and unexciting of details.  History is a story that needs to be taught like a story and not a bunch of names and dates.  I didn't have an appreciation for significance of the Pilgrims and those other early settlers who arrived in the next ten years.  I didn't understand the deprivation that they suffered or the loss of people.  There were a lot of these new settlers who in a few months lost husbands, wives, and children to sickness in those first few months.  I'm not sure that most teachers really know that story to be fair...they probably received the same type of education that I did on the subject.

I've been researching my family's genealogy for 15 years.  During that time, I've come across mostly common people who have made their way in the world - each in their own unique way.  However, so much of my family comes from the New England area and I knew that it was likely that I had a few Mayflower ancestors.  Last year I wrote about these ancestors in:


You might say that now when I sit down to our Thanksgiving table with family and friends that I have a new appreciation of who has come before me. 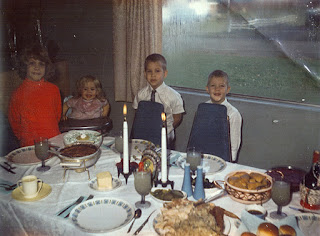 I think that this was my second Thanksgiving ..as I am the toddler sitting in the high chair.  So much on the table is familiar from my childhood - from the candle holders, the china, salt and pepper shakers to the Turkey in the center.  As I place that Turkey on our table once again, I know that it has been our family since about 1948 and has been on every Thanksgiving table during my lifetime.

I hope everyone has a wonderful Thanksgiving!