The name Sophia Vestelle Dollar Friddle seems to me to be the image of an elegant lady...I don't think my great grandmother could ever be accused of being elegant...Sophie probably fit her much better - but we called her Mom Friddle. When she became a grandmother in her mid 40's - she considered herself too young to be called grandma or granny...so instead she became Mom Friddle.  That is what her granddaughters all called her, as well as her great grandchildren.  She was born in 1894 in Shingletown, Johnson Co., TN and died in 1979 in Lewiston, ID - and what a life she lived between those years!

I only knew Mom Friddle as an old woman - my earliest memories of her are when she was in her late 70's and  early 80's.  By that point, she used a crutch to get around because of a broken hip and had a constant tick in her neck probably cause by something like Parkinsons...although I never knew exactly what it was.  My father came late to her family when he married my mother in 1959.  I'm sure Mom Friddle was delighted to add a handy young man who was talented with mechanics and was a true handyman - I know that she found my father very useful.  Dad used to enjoy stopping to see Mom Friddle when he got of night shift at the mill and have a cup of coffee with her.  I'm not sure that was really conducive to a good sleep after work, however.  I never personally drank a cup of her coffee - but I have heard that it was so thick that a spoon could stand up straight.  Mom Friddle took the coffee pot and removed all of the guts out of the percolator and put the coffee in the pot with water and boiled it on the stove for 15 minutes.  It might not have been too bad the first time, but she didn't empty the old coffee grounds and instead would add more grounds and water for her next pot of coffee.  I'm sure she eventually would empty the grounds and rinse out the pot -but as you can imagine - this didn't involve a thorough cleaning.  My grandmother (her daughter) decided one time that she would clean out the coffee pot and spent several hours trying to get it clean - unsuccessfully, I might add.  My mother suggested later that she should have just bought her a new coffee pot and throw the other one away.  My Grandma Cappy could make a penny scream and never spent money if she didn't have to...but after trying to clean out that coffee pot, she decided buying a new coffee pot might be the better course of action.

Mom Friddle drank a lot of coffee, but when it was time to go to bed, she required something else - a hot toddie!  Essentially whiskey and water and depending on you talk to - perhaps some sugar or lemon as well.  I don't know know how she made her hot toddie...but she couldn't go to sleep at night without one.  We have a photo of her walking back from her son, who lived nearby with a bottle of whiskey in one hand and a jug of milk and her crutch in the other hand.  Jack, her older son, had just arrived from San Francisco for a visit and popped out of the bushes to take the picture.  I'm sure some expletives were expressed! 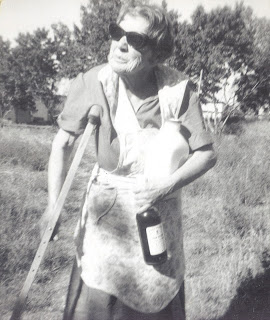 Towards the end of her life, Mom Friddle had to go into a nursing home.  This was after she had set fire to her kitchen and her children made the decision that she couldn't be on her own.  I'm sure the caretakers at the nursing home thought they were helping Mom Friddle, but all they allowed her to drink was weak tea.  After drinking coffee during the day for all of her life and going to bed with a hot toddie...the nursing home was giving her vicious headaches and she couldn't sleep.  Mom remembered visiting her and asking her doctor and the nurses why she couldn't have coffee and her hot toddie.  She was trying to make the point, that she was an old woman and shouldn't have to live the time she had left in misery.  The nurses still didn't think that coffee and whiskey was good for her health - however the doctor took the point and actually had to write out a prescription for coffee and whiskey. I'm sure the coffee wasn't quite as strong as Mom Friddle liked...but at least it had caffeine.  She didn't last very long in the nursing home - only about 6 months...but at 85 years old, she had lived a long and productive life and left behind stories that we still tell, 32 years after she left us!
Posted by CarmenMJ at 12:48 AM