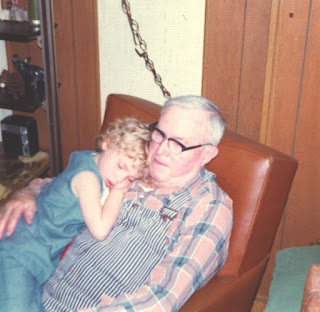 It is hard to believe that it has been 28 years since my great grandfather died. I was so lucky that I had him until I was 23 years old.  It is funny because one of my dearest memories of him happened on a spring break back when I was probably about 6 or so.  My family had gone to the Oregon coast to see the ocean...and to visit Grandma and Grandpa Gage.  Somehow or another, I fell into a tidal pool and as was normal - it was cold and rainy during spring break.  I was taken back to my great grandparents home, dried off and changed clothes.  Then I sat on my Grandpa's lap, leaned against his chest and fell asleep.  I didn't know it at the time, but that was probably one of Granddad Gage's favorite things to do - have one of his many grandchildren on his lap.

Granddad Gage was born on 5 Apr 1892 in Esperance, NY to Orlando Gage and Edith Gallup.  He had had an older brother who had died as a toddler.  He had been in a walker and had scooted under a table and stood up.  He was killed by a nail poking through on the table.  (Granddad always reminded everyone of that when he saw a child in a walker.)  Orlando Gage had been a widower with another family before he married Edith Gallup. 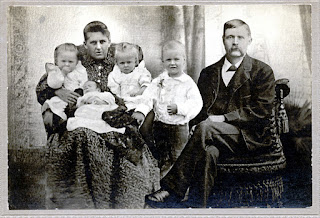 Granddad was the oldest of the four living children.  His name was Ora Silas, then the twins Pete & Phebe and his youngest sister, Alice.  In 1908, they lost their parents within 8 days of each other.  Their mother died of pneumonia and father had gotten sick and had died 8 days after their mother.  Granddad brought his siblings to Nebraska to live with their maternal Grandmother,  (Phebe Montanye Gallup) and then promptly left to off by himself and find a job at 15 years of age.  He worked as postman for a while, was in the army and then got work as a hired hand at a farm.  The story goes that he went up to a farmer who was advertising and asked what the pay was.  The farm said something like $5 a day...and Granddad replied that he was worth more than that.  Granddad said that he would work for him for two weeks and if the farmer didn't agree that he was worth $10 a day, he would move on with no pay.  After the first few days, the farmer didn't only agree he was worth the extra money, he paid him to make sure he kept him.  Granddad and Lou Brenner (the farmer) became lifelong friends.

No one could accuse Granddad of being stupid or lazy.  While Granddad didn't have a lot of formal schooling, he was probably one of the better informed and well read people I have known.  I remember watching him read Herman Wouk's War & Remembrance in his early 90's.  He might have been reading with magnifying glasses, but he was reading it.  Part of that was an innate curiosity about life and a love of learning...perhaps part of was also being married to a schoolteacher.  The last time I saw Granddad Gage was my great grandmother's birthday in June of 1990.  They were still discussing what was going on in the world.  They were also still competing at answering the questions first while watching Jeopardy on TV.

I have so many wonderful memories of Granddad.  It always reminds me how lucky I truly was.  When I think of a grandfather...I think of him, and he was my great grandfather.  Here are a few blogs that I have written about him through the years.