Back in 2001, when I first met traveled back to Tennessee and North Carolina...I met up with a Johnson cousin in Elizabethton, Carter Co., TN.  We both share the relationship with President Andrew Johnson.  (My 3rd great grandfather, Moses Johnson, was his uncle.  Anyway, she had found this house on a prior visit and so she took me by.  I found it to be very sad.  I know that President Andrew Johnson wasn't the most liked President and that there were many in the are who didn't have him in high esteem.  This house looked run down and about ready to collapse.  When I went back a few years later...the house was no longer there and I assumed that someone had destroyed it. 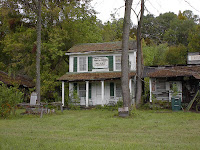 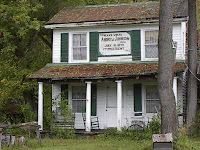 I later found out that the house had already been moved from the original location to this location where I photographed the house.  President Andrew Johnson had suffered a stroke while visiting his daughter (at this house) and died a few days later.  He was buried in Greenville, TN in a beautiful area and most of his family is also buried there.

I found it sad that this house hadn't been maintained and taken care of.  A few weeks ago, I was watching an old episode of Barnwood Builders.  They were working on a place in Elizabethton, TN and my ears perked up when I heard that the house had been moved and restored.  They didn't spend much time on the house - just a few glimpses and mentions - but it certainly perked my interest.  The house was moved and restored...and thanks to the Internet, I found an article about the house.

Am I related to Andrew Johnson

Thank you to Mr Schumaier for moving and restoring this house.