Roby Smith Dollar was the youngest child of Elizabeth Pennington and Alexander Monroe Dollar.  He was born in Ashe Co., NC on 18 Apr 1868.  As a young man, the family moved to Laurel Bloomery early in the 1880’s.  His uncle, Andrew Pennington had moved there around 1852.  Shortly after they moved to Laurel Bloomery, his mother, Elizabeth Pennington died.  His father, Alexander Monroe Dollar then married Sarah “Lulu” Pearce.  Roby married Sarah Margaret Simmons on 3 Jan 1889.  She was the daughter of Joel Simmons and Tempa Ena Harris.
Roby and Maggie were the parents of ten daughters. They were:  Cora Eula Dollar (1890-1988) m. Benjamin Harrison Sturgill, Amanda “Eva” Emaline Dollar (1892-1979), Bertta “Annis” Eunice Dollar (1894-1980) m Coy McKinley Parsons, Etta “Freddie” Winifred Dollar (1896-1988) m. Charles A Thomas, Tempa Maude Elizabeth Dollar (1900-2002) m. James Walker Beverly, Smithy Pearl Dollar (1902-1980) m. Walter E Parsons, Lena Cleo Dollar (1904-2004) m. Nathan Roth, Estelle Catherine “Kate” Dollar (1906-1989) m.  Raymond Freeman, Sarah Clyde Dollar (1909-2001) m. Thomas P. Jensen, & Carrie Mae Dollar (1911-2004) m. Wilfred Joseph “Fritz” Cloutier.
Roby worked alongside his father, brother, and uncle in a small family lumber mill located near the present Dollar Road in Johnson Co., TN.  After the death of his father in 1908, and the remarriage of his step-mother, Roby and Maggie inherited the family home near Shingletown.  Only a short time later, Roby lost his wife, Maggie, to pneumonia on 19 Feb 1912 and he was left with ten daughters to raise, the youngest being under a year in age.  With the help of his older daughters, Roby managed to raise his large group of children.  He worked as a farmer, lumberman and blacksmith.  It is interesting to note, that the house he lived in at that time, had been built most likely by his brother John Dula Dollar, and then passed on to his father, Alexander Monroe Dollar.  After Monroe Dollar’s death, the house went to his widow, and then was signed over to Roby’s wife, Maggie.  After her death, he inherited the little house. 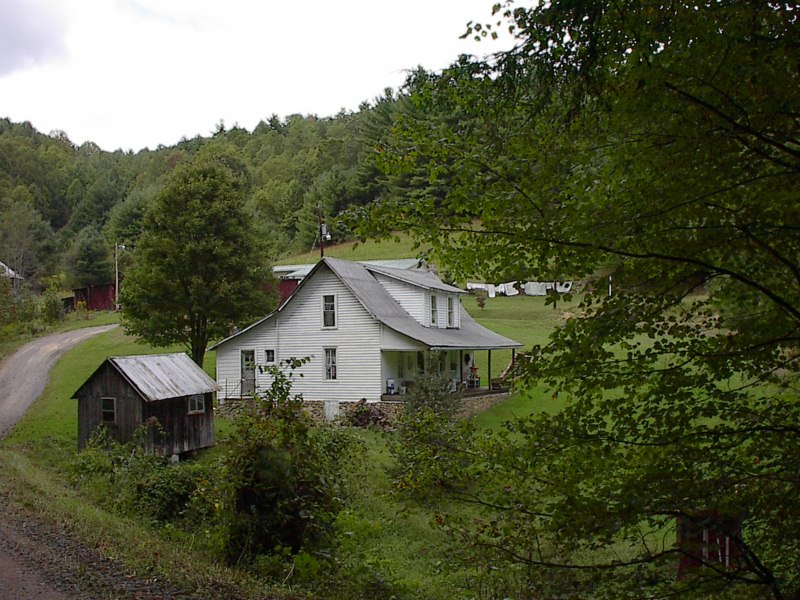 Roby was known to say that “He would never be broke because he had his ten Dollars.” However, it was difficult for the family to make a living.  He was a single father with a large family and they lived on subsistence farming and whatever work he could pick up.  Then the depression hit, and his daughters had to move elsewhere to support themselves.   Some lived as close as North Carolina, and others who moved to Illinois and New York.  Roby sold his land and house in Shingletown and built a small house in Mountain City where he spent the remainder of his life.
Most of Roby’s daughters enjoyed long and healthy lives.  Roby, Eva, Lena and her husband Nathan are all buried at Mountain View Cemetery and Sarah “Maggie” Simmons Dollar is buried at the Shingletown cemetery.
Here is a genealogy report on the family
Roby Smith Dollar and Sarah Margaret Simmons had the following children: