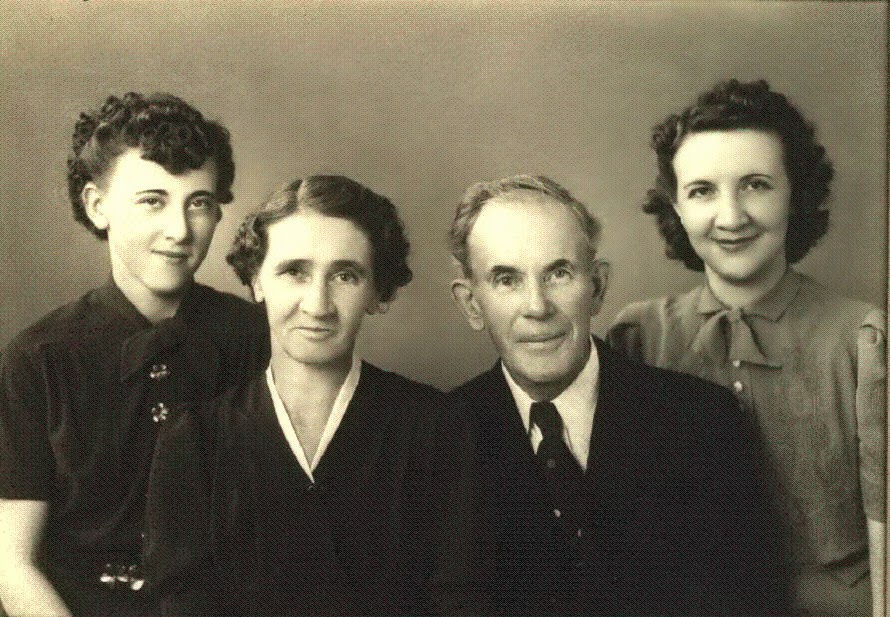 I think that this picture must have been taken in the late 1930's or perhaps the early 1940's.  It is a photograph of Bessie Calone Friddles, her husband Joseph Andrew Ray and their daughters Odess Ivalee Ray and Delta E. Ray.  Bessie was the daughter of Albert Ananias Friddles and Cordelia A. Vaught.  I never met Bessie but have spent time researching her.

Bessie's parents left Johnson Co., TN sometime between 1887 when Bessie's older brother, Joe was born and 1889 when she was born around Pomeroy, Garfield Co., WA.  The best guess is that it was most likely in 1888 and that was from a newspaper article about her father when he died.  Her father, Albert, was my great grandfather's older brother but I think in reality that he was the closest thing that my great grandfather had as a father figure.  My great grandfather was born in 1889 and his father died in 1890.  Albert was born in 1854 and was 34 years older than my great grandfather.  Albert married into a fairly well known local family when he married Cordelia Vaught on 15 Mar 1883 in Johnson Co., TN.  They had three sons within the first four years of their marriage.  They then took off and moved west to first Garfield Co., WA and later Grouse Flats, Wallowa Co., OR.  I don't know how they made the trip west.  I think that there might have been trains by that time, but I suspect that they left TN for the same reason that most people went west. There wasn't much opportunity for a young man to own land in Johnson Co., TN but there were all kinds of possibilities if he took his growing family west.  It was into this small family that Bessie was born on 15 Feb 1889.  Two younger siblings followed...one sister who died within her first few months of birth and a younger sister who was born 10 years after Bessie was born.  It was not too long after this youngest sibling was born that Bessie's life must have changed drastically.  Her mother, Cordelia, died on 20 Oct 1901 of Tuberculosis.  Cordelia left behind three sons and two daughters.  At 12 years old, I'm sure that many of the household chores fell to the little girl including taking care of her little sister.  It wasn't as though there were neighbors or close family nearby that could help.  I have heard from several sources that Albert was a remarkable man who kept his family together and raised his youngest daughter - but one has to wonder how much of that responsibility rested on Bessie's younger shoulders.

When Bessie was 19 years old, she married a 35 year old Joseph Andrew Ray.  Joseph was the son of Nathan William Ray and Margaret Susanna Pickens.  I am not sure what prompted Joseph to leave North Carolina and come west...but I suspect that it was his older sister Amanda.  Joseph's father Nathan William Ray served in the Third Mounted Infantry of NC for the Union.  Amanda married as his third wife to Samuel Marion Silver, a Confederate veteran.  (That had to be interesting a Union soldier's daughter married a Confederate soldier) They left North Carolina sometime after 1890 and before 1900 when they are recorded in the census.  Andrew and Bessie stayed in the Grouse Flat area until after 1930.  It was probably at this time, that many of the family members had left Grouse Flats and there wasn't much to keep them there.  I know that my great grandparents left in the early 1920's with thoughts of their son, Jack going to high school.

I like to make fun a bit of some of the close relationships between some of the families in some of the regions around my locality...and like many other instances there are curious connections here.  Bessie was the next youngest sibling of her brother Joseph McDonald Friddles and two years after Bessie married Joseph Ray, her brother Joe married Bessie Lucretia Silver.  Bessie was the daughter of Samuel Marion Silver and Amanda Emeline Ray, Joe Ray's older sister.  So Bessie's two daughters called Amanda and Aunt and Joseph Ray was Joe Friddle's children's uncle and great uncle.

Joe Ray and Bessie moved at some point to Linn Co., OR and Joe dies there on 28 Apr 1952.  Bessie survives him until 3 Dec 1967 and they are both buried near their daughter at Willamette Memorial Park, Albany, Linn Co., OR.

I grew up hearing the odd story about Bessie Ray.  I imagine she was quite close to my great grandparents because they were of a similar age.  I've also heard that Bessie's husband, Joseph had a drinking problem.  I don't know how true it is...but when I look at the breadth of Bessie's life from early days on Grouse Flats to raising her children among her cousins - I suspect that life was hard but there must have been a satisfaction to having her family close around.  As usual, I find it interesting the connections between families.  Not only do you have the family connection but I have to wonder if there was still friction because one family served under the Union and the other in the Confederacy.  I suspect it still wasn't and easy subject when Bessie was a girl.